For Jabil, Blue Sky is Ahead

An innovative new way to collaborate and market internally and externally underscores the selection of the 2015 EMS Company of the Year.

Upon hearing the announcement of its new Blue Sky Center, which opened at the end of April in San Jose, I contacted Jabil to ask for a look around. Beth Walters, the EMS company’s senior vice president of communications and investor relations, asked what my goals were.

Pretty simple. I wanted to check out the innovation center, I said.

“Well, you might be in for a surprise,” Walters replied.

That was an understatement.

To me, “blue sky” connotes basic scientific research without an obvious or immediate commercial goal. In Jabil parlance, however, Blue Sky is a merging of all its various technologies and services in a single location, packaged and served on a platter to prospective and current customers. In short, the entire scope of what Jabil can offer – some 101 locations across 26 countries – is boiled down into one 100,000 sq. ft. building in the heart of the Silicon Valley. It represents the near endless opportunities customers have to engage with Jabil: true end-to-end product conception, realization and distribution. Electronics optional.

Blue Sky didn’t come about by whim. Although a top tier EMS company for the better part of two decades, Jabil had a problem. It wasn’t profitability – annualized EBITA margin has been at least 5.2% the past four years running, some of the leading numbers in the business. Nor was it clientele. Two hundred and fifty of the top brands use Jabil, with top customer Apple now making up a reported 24% of revenues. It wasn’t even competition. The targeted acquisitions Jabil has made of late, many outside traditional SMT manufacturing, mean it no longer needs to go head-to-head with other Tier 1 and 2 EMS companies for high-growth business.
The issue was how to encapsulate the breadth of what Jabil could offer without asking a customer to visit all the company’s 18 centers of excellence. Likewise, customers couldn’t be relied on to understand all the possibilities for designing and building given product. “Perhaps somewhere inside that customer all the pathways were identified, but customers are as disconnected as anyone else,” opines Dave Wahl, Jabil vice president operations and general manager.

The solution: centralize. Some 300 engineers representing every vertical market Jabil serves were brought to San Jose. Wahl, a 20-year veteran of Jabil, was tapped to run the center.

“What management setup was ‘specialization orchestration,'” Wahl says. “We had areas of specialization across different markets that we needed to pull together and orchestrate for customers.”

It’s true that Apple, Jabil’s largest customer, is as mainstream electronics as one can get. That’s where Jabil’s vision truly deviates from the norm. Rather than rely on building traditional products for traditional customers, Jabil thought bigger. Much bigger. As in entertainment and hospitality.

One target was Mickey Mouse. Disney might be all movies and amusement parks, but to Jabil it represents a convergence of a broad range of technologies the company can now provide. To do so, Jabil is relying on a pair of acquisitions that were eyebrow-raising when first brought into the fold.

The company’s Diversified Manufacturing Services unit includes two of its more recent major buys. Nypro and Green Point are huge sources of cash: the pair made up 66% of the company’s record $17.9 billion in revenue for the fiscal year ended in August. And neither has much if anything to do with traditional EMS.
Purchased in 2006, Green Point produces plastics, rubberized castings, wood and metal processing, and custom tooling. SMT is just a component of its breadth.
Nypro, acquired in 2013, manufactures packaging for medical, food and beverage, household and personal care markets. Their lack of connection to component assembly made them outliers in the Jabil stable, at least until the current vision is understood.

“Disney wasn’t even on our radar five years ago,” Wahl notes. But a deal to build electronic wristbands has stretched far beyond the SMT line. The relationship is emblematic of the drive to take so-called dumb products that are “begging for smarts” and combine them with technologies that can be integrated across many areas.

Consider, for instance, an asthma inhaler with the added functionality of telling the user if they are using it correctly. Jabil not only can build the circuit board, it could design and develop the plastic housing; mold the plastic; write the software and interface for recording incidents; even build the machine that would form the plastics. With such innovation, Jabil could become as synonymous with molding and single-use packaging as it is with EMS, not to mention far more integral to its customers.

A more ambitious project is the smart city. At Blue Sky, Wahl shows a glassed-in diorama of a connected city (FIGURE 1) that lights up to represent various opportunities to add intelligence to everyday scenarios. A firefighter is called to extinguish a building fire. Street traffic is automatically rerouted to ensure the firemen travel the most expeditious route. The elevator shaft could communicate that it has so many minutes of structural integrity left. The building knows when an area has been vacated. It also determines the fire “hot spot.” 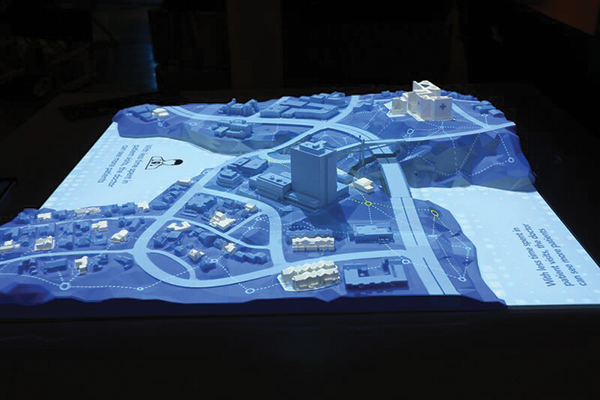 Figure 1. The “smart city” highlights all the potential places Jabil technology could conceivably enable a user.

“It’s about accelerating and connecting things,” Wahl says. This is where the Internet of Things goes beyond buzzword and enters the realm of the practical and beneficial. This is also the basket in which Jabil is putting its eggs, in hopes of moving far beyond a built-to-print model to one that’s innovative and proactive.

In mid September, when Circuits Assembly visited the Blue Sky Center, the onsite IoT lab was all of four days old. The focus is targeting and understanding the different markets IoT could be applied to. And that’s where companies like Disney or Hyatt suddenly become major prizes in Jabil’s customer base. So while OEMs may still look at Jabil as a vehicle for producing a PCB, the latter sees board technology as just one part of a much bigger picture.

The Blue Sky Center helps customers visualize that picture through a series of kiosks, each demonstrating one of the technologies Jabil can offer (FIGURE 2).
Customers are walked through in-depth conversations with company experts in each area, on two- to three-year rotations from their home bases. The onsite engineers are tasked with helping clients connect the dots. “We get a lot of, ‘I’ve dealt with you for 12 years and didn’t know you had all this,’” Wahl says. “We say, ‘We didn’t know we had all this either.’” 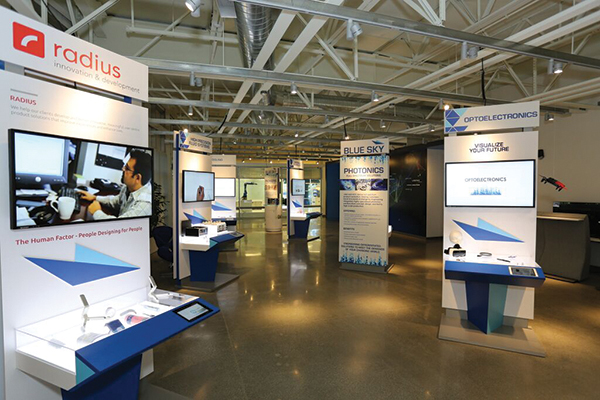 Turn a corner, and there’s StackVelocity, Jabil’s business unit for functional data centers, taking router, switches and server builds and adding compatibility and performance testing. Nearby are an SMT line, clean room, and a Stratasys Fortus 450MC, among other 3D printers. Trying to get ahead of the curve, Jabil, which owns 10,000 CNC machines, is undertaking research to determine when they might be replaced, and by what. An acoustics lab is in the near-term plans, where they will study haptics and optics.

Robots are getting big media hype, but inside the electronics factory they remain a pipe dream. At Blue Sky, Jabil has a pair of robots: a Rethink Robotics Baxter model and a more refined Kuka model (FIGURE 3). Jabil has a standard integration module (SIM) line designed for replacing operators for routine tasks. The study is beyond practical – Jabil currently employs 75,000 workers performing routine automation – but the high level of custom programming needed, coupled with a price tag two to three times above Jabil’s estimates for broad deployment, remain roadblocks. While development is proceeding apace at Blue Sky, implementation remains two to three generations away. “Automotive can go eight years, but we need to do many different things the same day,” notes Wahl. 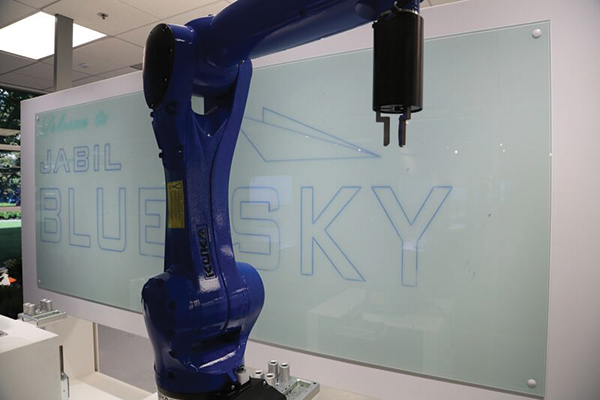 Figure 3. To aid efficiency and drive down overall cost, Jabil is investing in robotics research, such as this model made by Kuka.

Helping move the process along is Jabil’s Radius Product Development team, acquired with Nypro. Radius is, in short, all about innovation development. It features four design centers around the world, one of which, naturally, is the Blue Sky Center. Amorphous sounding, to be sure, yet Wahl describes its work as “very structured.”

Tying everything together is the logistics and supply chain management. Again, leveraging the IoT, Jabil developed a proprietary invention called the Intelligent Control Tower. The tool involves machines talking with machines, and submitting the data analytics to Jabil to inform decision-making. Unlike other Top Tier EMS firms, Jabil traditionally has built a majority of products in batches. Given the extensive, extended supply chain, communications must flow bi-directionally and quickly throughout the world. “A $30 part might affect $30 million across six customers. Analytics helps crystallize the risk. The key is accessing the data,
orchestrating it, and effectively exploiting it.”

That’s when Control Tower comes in. While at Blue Sky the presentation of the supply-chain dashboard resembles a war room, the heart of the operation is a web-based browser application which details up-to-the-minute status checks, while illuminating potential supply-chain disruptions around the world (FIGURE 4).
A series of 15 monitors display everything from real-time factory metrics such as production yields to a worldwide map of second and third tier suppliers to weather and commodities reports. A 4.0 Richter scale tremor in Japan, for instance, might trigger a decision to buy more of a certain component in the event a disruption is impending, or perhaps even lead to relocating the supply line. One display aggregates much of the data into a risk/opportunity algorithm called the Supplier Radar. With one recent survey indicating 70% percent of respondents have real-time status updates for less than half of their supply chain, and 82% reporting it would take “days” to understand the impact of an extreme global weather event, the advantage of such big data tools is unquestionable. For its part, Jabil says it has reduced inventory by over $300 million by leveraging Control Tower. 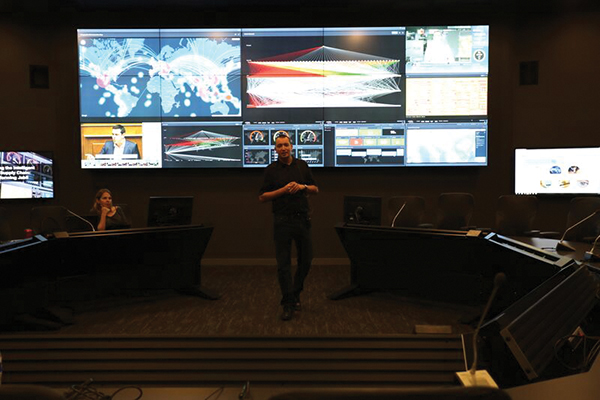 Blue Sky came together quickly. Per Wahl, three or four meetings was all it took: “We had content all over the place, and we weren’t taking advantage of what we could show.” Once the go-ahead was given, the Silicon Valley was an obvious landing spot, in proximity to almost every Fortune 100 company’s R&D labs. That Jabil has a full-scale manufacturing site nearby was a plus, he adds, because it keeps Blue Sky “tied to reality.”

Almost every EMS company in time goes through a remodeling. Its key end-markets shift; its ability to compete in its chosen region changes; its management turns over. Jabil is no different. What separates the company from many others in the EMS/ODM space, however, has been its ability to retain its focus and profitability throughout these shifts. The current CEO, Mark Mondello, was promoted to the top spot in 2013, having moved up the ranks since his hiring as a manufacturing supervisor in 1992. His copilots, president Bill Peters and COO Bill Muir, have been on board since 1990 and 1992, respectively. Its ability to recognize and groom talent from within is a competitive advantage.

For its vision, willingness to reimagine and recreate itself, and its ability to not only survive but improve through management changes, Jabil is CIRCUITS ASSEMBLY'S 2015 EMS Company of the Year.