The CIRCUITS ASSEMBLY Top 50 bucked a flat financial trend in 2017. Can it last?

Industry 4.0 might have been the theme of 2017 (and beyond), but for EMS companies it was less about automation and more about reach.

In that vein, two trends are emerging among the world’s 50 largest EMS companies: One is the continued extension of manufacturing services into sheet metal, plastics and other related materials. Such services are seen as natural extensions of the electronics domain, where assemblers are supplying not just the “guts” but also the enclosures. Additionally, printed circuit design is becoming an almost must-have offering. The second is the overarching reliance on automotive or Apple (or in some cases, both) as the drivers for growth. When will that end?

2017 was a solid year for EMS. The overall industry topped initial forecasts for flat growth, spurred by the US beating back the traditional hesitancy that comes with presidential election years.

Among the upper echelon, nine of the top 10 companies ranked in this year’s CIRCUITS ASSEMBLY Top 50 grew, as did 17 of the top 20. More than two-thirds of the listed firms were up year-over-year, based on their local currency. The big winner: No. 25 V.S. Industry, which grew 61% year-over-year. Falling out of last year’s Top 50 were WKK, which actually had a solid year (sales up 9%), and Alco Electronics, which didn’t (sales plunged more than 25%). Others exiting the list were Hana Microelectronics and Lacroix Electronics. Of those remaining in the Top 50, Taiwan Surface Mounting Technology (no. 28) fell the most, at 12%.

Many of the top gainers are suppliers to the automotive electronics industry. These include Wistron (no. 5), Flex (no. 6), Jabil (no. 7), BYD (no. 9), SIIX (no.19), UMC (no. 24), Kimball (no. 26) and IMI (no. 27), among others. UMC and V.S. Industry breached the $1 billion mark for the first time. In the history of EMS companies that reached that threshold, many have been eventually acquired, but only two (Elcoteq and Nam Tai) ever flatlined.

An Apple a day. All the major Taiwanese ODMs are supplying to Apple (Foxconn, Pegatron, Quanta, Compal, Wistron, Inventec, BYD), as is Jabil. So are the flex circuit assemblers that made the list (ZD Tech, Nippon Mektron). Estimates vary, but Apple is likely responsible for around nearly $50 billion in electronic assemblies alone, not including all the ancillary parts like enclosures.

Not every potential service is seen as a “must have.” Indeed, EMS companies involved in bare printed circuit board manufacturing are going two different directions. Asia-based organizations are doubling down, as evidenced by Suzhou Dongshan Precision Manufacturing’s pending acquisition of Multek China from Flex. Meanwhile, leading fabricators of flex circuits continue to elbow their way up the Top 50 list, thanks to the assembly operations most offer. It’s difficult to put a precise value on those revenues, but we use a factor of 40% of total revenue to account for flex assembly sales.

No. 21 Zhen Ding, also known as ZD Tech, a Foxconn subsidiary, is now not only the largest fabricator in the world, but its flex assembly revenues are estimated at $1.5 billion. It just slid by no. 22 Nippon Mektron, its main rival for flex assembly. Other major flex assembly companies are also springing onto the Top 50, widely boosted by Apple. They include Young Poong (no. 44) and Sumitomo Denko (no. 46). 3CEMS’s bare board operations comprise about $300 million of annual revenue (which are not included here).

Meanwhile, US-headquartered firms are consolidating; witness no. 11 Sanmina’s shutdown of its Owego, NY, plant (the largest PCB fabrication site in the US, by area) or the aforementioned sale of Flex’s Multek operations in China.

The other “A” – acquisitions – did not factor into this year’s Top 50.

Hard currency. All revenues shown were calculated based on calendar 2017, with a few exceptions (as noted).

Exchange rates used were those on April 16 (TABLE 1). The dollar fell against many major currencies over the past year, reversing the gains made in last year’s list, and affected the relative rankings of a few companies. In particular, it dropped 14% against the euro and 15% against the Chinese yuan. The only currency against which the dollar rose was the Hong Kong dollar. 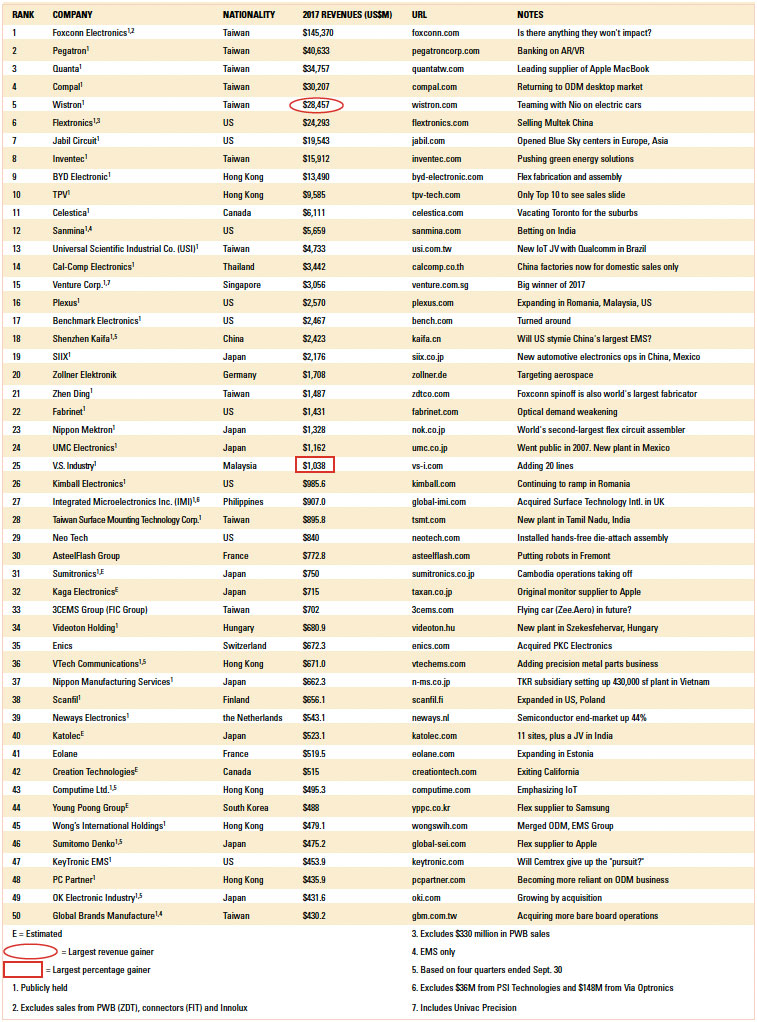 Corporate growth rates were tabulated in the local currency, then converted to US dollars.

Geographically, Japan has its most entries ever on the list, although part of that is due to inclusion of companies that should have made it in previous years (TABLE 3). Southeast Asia (including China) has 24 entries, down one from a year ago. Europe and North America were static at seven and 11 entries, respectively. South America and Africa are still waiting to crack the list. 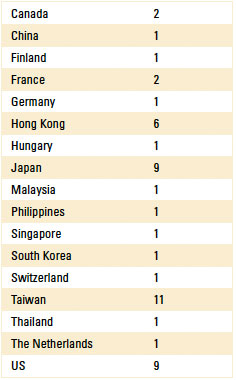 What gets counted. The lines between ODM and EMS are so blurred, we have long since given up trying to distinguish between revenue sources. Instead, we make every effort to exclude revenue from activities unrelated to component sourcing, design, assembly, test and logistics. As such, bare board operations are excluded. (Thanks to Dr. Hayao Nakahara for providing those sales estimates.) Where the parent company breaks out the operations on financial statements, the revenues are not counted. Case in point: Sales from such disparate entities as Hana Microelectronics’ IC assembly services, no. 49 PC Partner’s branded video graphic cards, no. 47 Wong’s International Holdings’ property division, and WKK’s equipment group are excluded. In some cases, “losing” those sales is enough to slide the company out of the Top 50. New Kinpo Electronics, perhaps better known by its subsidiary Cal-Comp Electronics, directly or indirectly owns companies that build self-branded printers (XYZprinting) and semiconductors (Liz Electronics, QBit Semiconductor). It includes Cal-Comp in its financials, even though the latter’s operations in Thailand are less than 50% held by Kinpo. Kinpo had revenues of $4 billion in 2017. Cal-Comp (no. 14), which is also separately publicly traded, made up $3.44 billion. It’s impossible to discern from Kinpo’s financials exactly how much of its ODM/EMS sales are from Kinpo Electronics aside from Cal-Comp. As such, we are sticking with just the Cal-Comp figures. While the consolidated number would be higher, it would not change the company ranking.

That said, most companies take an approach like that of no. 15 Venture, which merges its ODM and EMS revenues with those of its standalone plastics business, Univac Precision. Jabil’s GreenPoint is a standalone operation for designing and manufacturing plastic and metal parts. It is a major supplier of phone cases for Apple, which also happens to be Jabil’s top customer, at 24% of its revenue. In such cases, no attempt was made to break out the non-EMS sales. Some variations between CIRCUITS ASSEMBLY's estimates and company actual are inevitable.

For years, we omitted no. 32 Kaga Electronics from the Top 50. This was because of a miscommunication with our source at Kaga, who was providing us with the revenues from the region he is in, instead of the company’s worldwide sales. That’s been corrected this year.

We watch other top 50 lists with care and note the occasional deviation. One company that makes other lists, but not ours, is Alpha Networks. Reason: Alpha brands most of its products. As such, we view the company as primarily an OEM, not an ODM. As always, any errors are those of the author’s.

What’s ahead for 2018? While the number of vehicles sold could taper off, especially as interest rates rise around the world, the automotive industry will still drive additional sales, thanks to the higher amount of electronics content in vehicles. Telephony-related services are also leading a shift, going beyond handhelds to include 5G systems and ever-more demand for cloud and related products, which also require higher speeds and more bandwidth. Talk may be cheap, but in EMS it will pay the bills.