For all intents and purposes, advancements in screen printing over the past decade have been relatively small. I’m not saying speed increases, inspection capability, multifunctionality, software advances and the like aren’t significant: They are. It’s just that in my view, the last really big change in terms of technology was the introduction of enclosed head printing, which occurred in about 1998. Since then, there have been steady incremental developments.

Based on recent work, however, I firmly believe we are about to see a huge shift in terms of print capability. Let me explain: As we have moved toward ultra-miniaturized components, the ability to achieve good transfer efficiency (the amount of material released from a given aperture size) from stencil architecture that accommodates heterogeneous assembly (miniaturized and standard interconnects) has been challenged. In terms of the area ratio (the ratio of aperture size and stencil foil thickness), we can fairly accurately map what we expect the transfer efficiency percentage to be at certain area ratios. Historically, it has been advisable not to design anything below the 0.66 mark.

However, with materials advances and developments in stencil technology over the past decade, the industry has become increasingly comfortable with the 0.66 threshold and has even started to push toward 0.55. For example, a 250 µm aperture on a 100 µm thick stencil foil was considered dangerous territory 10 years ago, yet it’s not uncommon to see 220/210 µm apertures on 100 µm foils today. That’s not to say that you will get perfect paste deposits every time at that area ratio, but for manufacturers that have to place ultra fine-pitch devices, there aren’t many cost-effective alternatives.

The reality is that component pitches aren’t going to get bigger. So, what happens when we have to move to 0.5 (or below) area ratios? How do we achieve excellent transfer efficiency, maintain repeatability and also accommodate the placement of larger components alongside the very small devices? We asked engineers to break way past the 0.5 area ratio barrier, even beyond 0.4, while maintaining the ability to do so with standard, 100 µm stencil foils.

To do this, a method had to be devised that would improve the shear thinning capability of the print stroke. When solder paste is at rest, it has a high viscosity.
When the material is printed and shear thinned, viscosity is reduced significantly. By developing a technology that increases the propensity to shear thin, the material will be more capable of flowing into ultra fine apertures, thus increasing the packing density and improving wetting to the substrate. This, of course, dramatically enhances transfer efficiency.

After intense development, many internal tests and several beta site trials, we are confident that an active, energized squeegee assembly has been engineered to deliver the repeatable 0.4 area ratio capability. Figure 1 illustrates the transfer efficiency. The blue curve shows the historical (IPC) work and the 0.66 area ratio rule, the point below which process nonlinearity occurs. Represented in red are the small improvements over the past 10 years – largely achieved through material and stencil developments. Finally, the green curve shows the capability possible today with new, activated squeegee innovations. 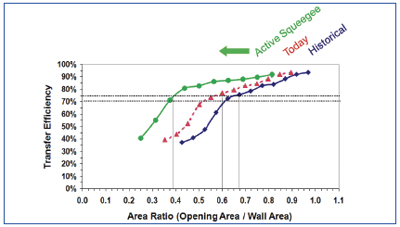 So, in a nutshell, with no changes to solder paste materials, stencil thickness or stencil material, the 0.4 area ratio has been reached – repeatably. By introducing a level of activity and energy into the squeegee such that it significantly increases shear thinning of the solder paste, 0.3 mm CSPs can be placed beside large tantalum capacitors with adequate deposit volumes and excellent transfer efficiency. Beta tests also revealed this technology tightens mainstream print processes. This is, indeed, major progress for the next printing decade and further validates the old adage that “rules are made to be broken.”