A case study of a major defense OEM shows how even a good prevention program can be immensely improved.

The following Class 0 (see definition below) case studies illustrate the complexity and customization required to successfully produce products utilizing these ultra-sensitive devices. They also form the basis of a third-party qualification for Class 0 manufacturing operations by the ESD Journal.

It should be noted the term Class 0 has not been defined for manufacturing applications by any industry standard. We have found that manufacturing failure rates escalate exponentially for devices with ESD withstand voltages below 250V for either HBM or CDM. MM is intentionally omitted from this definition, since it is largely redundant to HBM. It is also vitally important the manufacturing process has a well-defined trigger for risk assessments of these ultra-sensitive components. These risk assessments involve verification of manufacturing process capability, as well as for any risks that may be passed on to customers. In some instances, risk assessments have resulted in the redesign of components to improve the ESD performance. Thus, we propose to define a Class 0 area for ESD manufacturing as one that includes components that have withstand voltages below 250V for either HBM or CDM.

It has become clear that customized manufacturing requirements for Class 0 products are essential. It is unlikely that any standards body will be able to develop a cookbook process in the foreseeable future. The variables are far too great for standardization. Hence the ESD Journal has developed a Seal of Approval.

The ESD Journal (esdjournal.com) Class 0 ESD Journal Seal of Approval for customized manufacturing operations dealing with these ultra-sensitive devices is based on peer review of application-appropriate customization for Class 0. It must be clearly demonstrated that the petitioning company has sufficient advanced technical expertise, as well as documented Class 0 procedures, yield success and exceptional compliance to procedure.

Two companies have achieved this level of recognition: Harold Datanetics Ltd., China, for its Class 0 Tape Head product manufacturing and BAE Systems in the US for Class 0 Manufacturing Excellence. BAE has also completed a requalification. (Additional companies are working diligently for the same recognition.)

Case study 1: Production stoppage. This Class 0 case study took place during ramp-up of a billion-dollar product line and at a time when advanced auditing techniques such as ESD event detection and current probe measurements were not being practiced. The production line was virtually shut down due to high failure rates. Severe yield losses coincided with the introduction of an N-type metal oxide semiconductor (NMOS) device with an ESD withstand voltage of 20V for both HBM and CDM. Major problems were encountered during device fabrication and printed circuit board assembly.

These low thresholds were the result of the lack of protection circuitry on the high-speed pins of the device. The designers presumed any such circuitry would prevent the device from performing its intended function. They ultimately were able to redesign the device and attain 1000V withstand voltages without compromising system performance. However, it was not in time to avert the following production crisis.

PCB assembly failure rates (Figure 1) were fluctuating between 10 and 30%, and some lots were 100% defective. Production was at a virtual standstill. The cost implications of continued failure were very high and were jeopardizing the entire product line. A detailed failure analysis investigation revealed that virtually all the failures were ESD-induced. 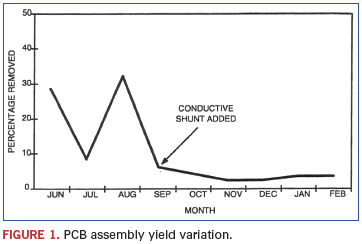 A technical assessment of the manufacturing line was undertaken, and an action plan compiled based on conventional wisdom at the time. Because of the extreme seriousness of this situation, the weekly reports were channeled to high-level executives in the company.

This problem was resolved with the introduction of a customized dissipative shunt referred to as a “top hat” (Figure 2). This shunt consisted of molded static dissipative foam precisely contoured to contact each lead of the device while on the circuit board. The top hat was placed on top of the NMOS device immediately after it had been assembled to the PCB. This resulted in the leads of the device being electrically connected through the static dissipative foam and static potential differences minimized. 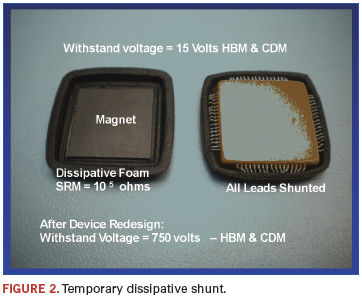 The board was then processed normally through the rest of the assembly line until it reached final test, when the top hat had to be removed. This simple addition of a shunt to the device dramatically improved yields and resulted in failure rates of less than 2%.

The simplicity of this solution is particularly striking in contrast to more common alternatives that proved unsuccessful and costly. The extraordinary measures of using a multitude of standard precautions proved to be overkill and ineffective. The solution described here introduces a simple shunt into a set of existing procedures. The incremental cost was merely $1,000 for a set of top hats. The savings realized on the production line reached $6.2 million per year for this one device on this one line and enabled a billion-dollar product line to ship on time.

Another benefit derived was the impact on the design community. Asked to justify a withstand voltage of 20V for the NMOS device involved in the project, designers responded by redesigning the device and raising the level of sensitivity to 750V HBM and CDM, a remarkable accomplishment. Some system–level design changes were made to accommodate the new protection circuitry and maintain system performance.

As a direct result of the experience outlined in this case study, minimum design requirements were modified and a new set of handling requirements for Class 0 established. It was apparent that a cookbook approach to establishing handling criteria for ultrasensitive devices would not work. For example, it is likely some of the automated equipment used in the assembly process was causing the problem. Clearly, extraordinary controls such as room ionization could not solve the problem. Adding a shunt was not only necessary, but sufficient to protect the device at great economic benefit. In addition, the manufacturing line was able to continue to operate as usual and with minimal disruption.

In conclusion, a number of valuable lessons derived from this experience have led to today’s advanced approaches for Class 0 sensitivities. First, design transfer or new product introduction checklists must include ESD sensitivities, followed by risk assessments for devices below 250V or redesign of the product to eliminate these ultra-sensitive components. Also apparent: Customized solutions are essential for cost-effective mitigation of ESD failures. Advanced auditing techniques available today such as ESD event detection and current probe analysis enable scientific determination of optimal controls and countermeasures. The final ingredient is technical expertise to conduct advanced measurements and to develop application-appropriate remedies. These lessons learned helped to create a foundation for the following case study, as well as the creation of the ESD Journal Class 0 Seal of Approval.

Case study 2: BAE Systems. This case study began during new product introductions, when ESD failures were detected with failure analysis. BAE’s Nashua, NH, site had good ANSI/ESD S20.20 controls in place. However, even one failure would be too many for this high-reliability application. So, prior to ramping up production, BAE decided to bring in external expertise to prevent any production or reliability issues.

The approach started with a baseline technical assessment, followed by customized reengineering of each critical operation, the use of quality tracking metrics and advanced technical training. The detailed process changes involved application-appropriate customization.

The baseline technical assessment is a detailed analysis of each operation, looking at HBM compliance and alignment with ANSI/ESD S20.20. This is followed by advanced auditing techniques that include a variety of ESD event detectors and high-bandwidth current probes. More traditional measurement techniques such as electrostatic voltages can be helpful, but at times insufficient to detect subtle sources of losses. Event detection and current probe measurements have become essential tools for Class 0 applications. They enable systematic modification of each manufacturing operation to be either ESD discharge event free or to exhibit events far smaller than the current failure threshold.

A multi-day workshop was conducted to elevate the users’ understanding of CDM and the technically advanced measurement techniques. Ultimately, the user must be able to fully understand Class 0 mitigation and measurement techniques. This training is reinforced with ongoing technical support for a full year to ensure the level of understanding required to achieve the Class 0 Seal of Approval.

Throughout this process, ESD Quality Metrics, including our novel Yield Risk Benchmarking methodology and meaningful quality metrics, are used to track the improvements. This enables management to set measurable goals and objectives and to efficiently monitor progress.

The benchmarking method is an accurate means of quantifying the performance of an ESD program, and there is a direct correlation to personnel compliance with ESD procedures. It has been successfully applied to hundreds of ESD programs.

The analysis of the strengths and weaknesses of BAE’s ESD program, as well as the progress over 18 months, is reflected in Figures 3 and 4. These indexes were derived from the novel methodology and were used as a guide for improvement. Virtually all elements now reach 90% or higher. BAE’s Yield Risk Benchmarking score started at 53% and ultimately reached 94%, and its process has not experienced a single ESD failure over a three-year period since implementing Class 0 controls. 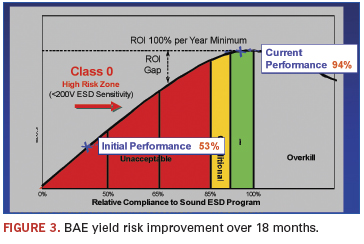 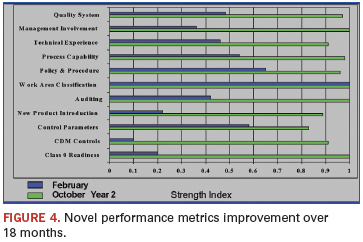 Auditing, New Product Introduction and Class 0 Readiness showed sharp improvement. Auditing is one of the more critical elements of program management, and often improvement is essential to mitigate ESD losses. Data derived from auditing can be effective in the early identification and prioritization of process deviations. These data can also be used to effectively leverage limited resources for better Class 0 compliance.

Figures 5 and 6 track improvements. Figure 5 is the novel EPM Yield Risk Benchmarking and is a reflection of the ESD Quality System improvements. The blue line is the roadmap projected at the outset, and the red line is the actual performance that was validated each month. Figure 6 is the closure timeline for the action items in the associated technical assessment. Both trend tracking metrics followed the roadmaps closely, with impressive final scores of 93.6% and 96.6%. Figure 7 illustrates the remarkable improvement relative to the electronics and defense manufacturing industries. 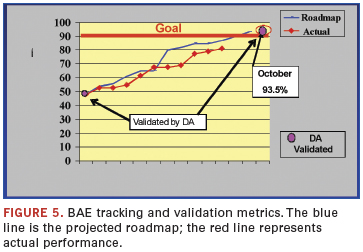 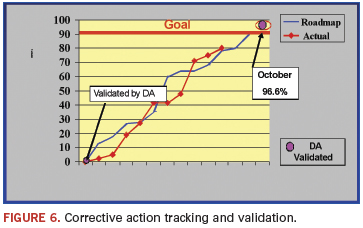 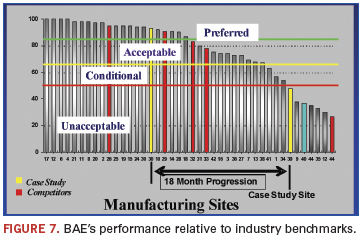 Elements of a good program include the following: