Bestronics is coupling its experience with OEMs and millennials to make building in the Silicon Valley fun again.

I knew the building seemed familiar, but it wasn’t until I was inside that I recognized why.

What was once the San Jose headquarters of Flex is now the home of a growing EMS firm known as Bestronics. But whereas Flex occupied a four building campus, Bestronics is on its second facility, which it took over in 2016.

It’s been a long climb since the company was founded in 1986. A boost came in 2011, when a private equity group acquired it and brought in new management.
The current chief executive was familiar too. Nat Mani was a cofounder of Fabrinet, now a $1 billion contract assembler, and later spent time as senior vice president of sales and marketing at Sanmina.

Bestronics’ customers include many of the biggest names in the Silicon Valley, and the list is stretching into the Midwest and Eastern US. The average length of a customer relationship is currently eight to nine years, with some engaged for more than 15. It tries to add a few more each year. The top two customers each exceed 10% of the firm’s revenues. 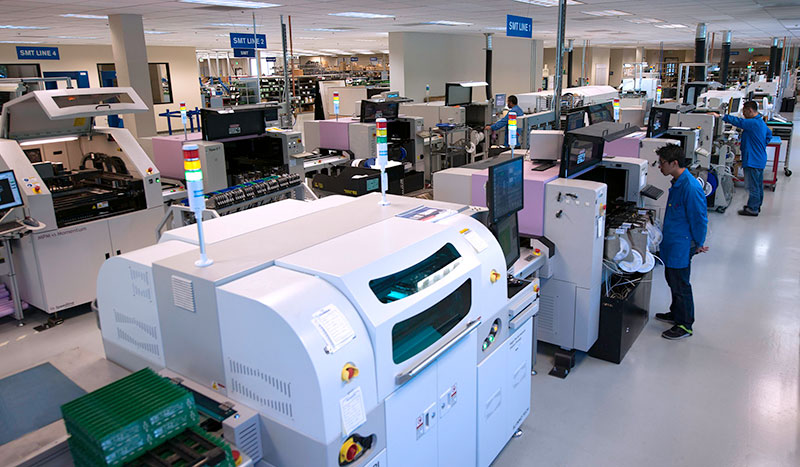 ALL IN PLACE Bestronics runs three SMT lines in Building 1.

Like many EMS firms in the US today, Bestronics eschews chasing revenue in favor of complex products that don’t easily migrate offshore because of the technology mix or for IP reasons. Some 99% of its business is full turnkey. For new customers, there are no minimum order sizes. Instead, Bestronics seeks clients that have sound finances and show potential future value. Its largest sectors are power/automation and industrial controls, and other key segments include medical instrumentation, warehouse automation, military, building controls and cleanroom equipment. “With our cleanroom and background in optics and packaging, there are some interesting opportunities for us,” Mani says.

War for talent. Few smaller firms in the Silicon Valley can compete with the allure – not to mention the compensation and perks – of the Googles and Apples. Bestronics’ approach is to create a culture that challenges workers intellectually, while lowering the tension.

The battle for staffing talent is omnipresent, the firm allows. Such pressure informs the way the staff of 165 is managed. “There’s enough stress in the business that comes from the business itself,” Mani explains. “We say, ‘No yelling and screaming. Don’t turn up the tension dial; it doesn’t help.’ ”

“We partner with the city of San Jose for training,” adds Steve Yetso, vice president of commercial operations and supply chain. Bestronics will also search off the beaten path, recruiting employees with liberal arts degrees or from industries outside electronics manufacturing but who have great computer or communication skills.

Bestronics then leverages the new blood by engaging them with customers. “We use that natural intelligence and teach them how to learn and manage all aspects of our operations, such as quality analysis,” Yetso says. Having a single facility helps in that there are no “China hours” for employees. 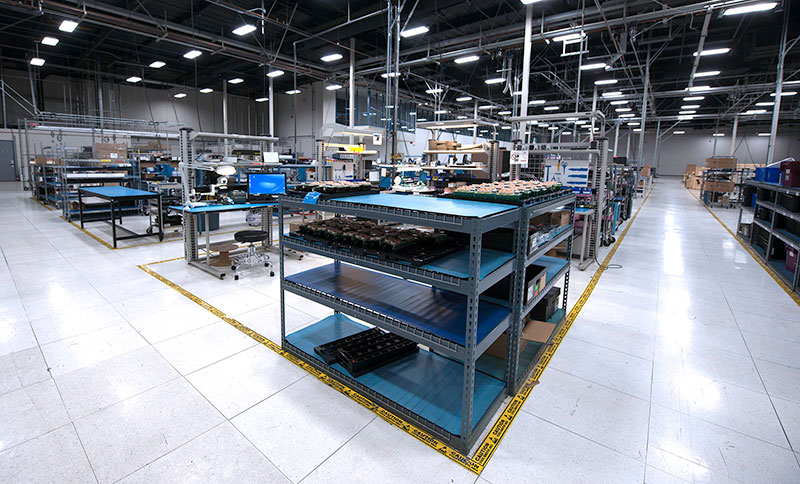 The appeal has extended to the factory floor. NPI work instructions are digital, which “fits the millennials’ needs.” And a smartphone-based project tracker developed for program managers and supply-chain management staff provides immediate updates.

The buy decision. The four top Bestronics’ officers – Mani, Yetso, CTO Ron Menigoz and vice president of manufacturing Ben Calub – all have extensive experience both in EMS and OEM environments. In a region with some 250 EMS shops, Mani sees this as a competitive advantage.

“We’ve been through all the problems and challenges,” he says. “(Yetso) has seen programs launched to Asia, and knows how the contract manufacturer affects different OEM business models. We use what we learned on the OEM side. We are not a typical build-to-print EMS. We’ve been in their shoes and seen their problems. We can leverage our background and experience.”

Adds Yetso, “We speak the same language. OEMs are driven by different key management infrastructure (KMI) goals, like inventory turns, cash flow, etc. We try to understand the underlying KMI, and tailor our solution to their KMI goal.”

“And we can be friendly about it,” adds Mani.

Finding the right customer fit is a never-ending process. Says Mani, “When a company looks at an EMS solution, they say, ‘Let’s quote 10 to 20 and see what we come back with.’ Is there a strategy for that customer? To the extent we can understand that, we see if they are a good fit. How do you find the right customers that value making something here for a longer period of time?”

The loss of a customer initiates a process. Says Yetso, “There’s internal reflection as to what we can do better. We’re never satisfied to lose someone. We go right to them to ask, ‘Why did we fail? Why didn’t they get the value proposition we provide?’ When failures happen, it’s almost always mutual. It’s not working for you or us, so we part, but in a professional way. It’s almost never because we we’re consistently late or couldn’t built the part.” This is how Bestronics turns failure into success.

At that time, Bestronics operated a single 71,750 sq. ft. facility. The expansion into Building 2 in 2016 extended its footprint by 75,000 sq. ft. The two buildings act in concert, with SMT and cleanroom activities in the original site and box build and shipping in the newer one.

The shop places parts down to 01005. The lines run about 11 hours per day, and some weekends. Product is barcoded, and component reels are cut to decrease setup time. Testing is nonstop 24/7.

Bestronics registers all lots with barcodes, allowing it to discern the location of all parts, plus what’s currently in raw materials inventory, WIP, final goods, shipping, and post-shipping. The system allows the contract assembler to locate a given PCB or part in fewer than 24 hours.

Every board is robotically inspected, followed by AQL sampling based on lot size to confirm those inspections. A dedicated testing room features a trio of Agilent ICT i3070 in-circuit testers and an ESS chamber.

Building 2 was where the recognition kicked in. Just across a back parking lot and similar in size to Building 1, the internal layout was different. The giveaway was the atrium-style manufacturing area. Using the factory as a backdrop, we shot a cover photo there a decade ago as part of a profile of Flextronics. 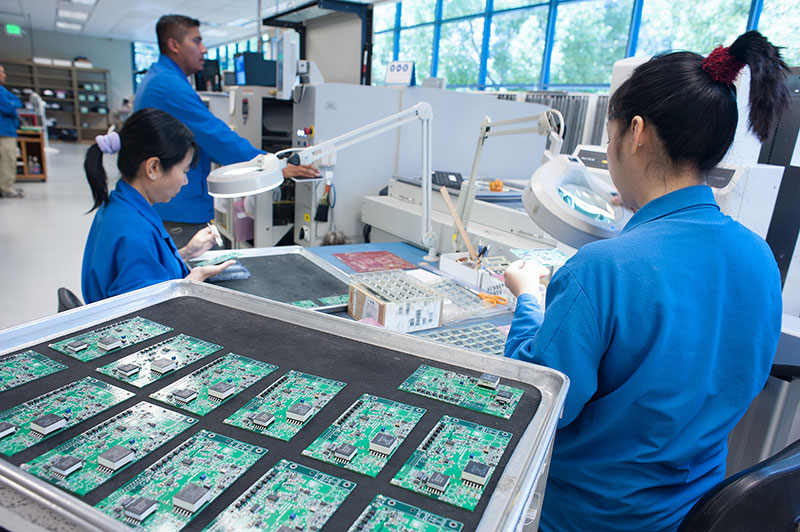 Component crunch. Supply-chain management is a critical function in electronics manufacturing, especially in this era of component allocation. Bestronics owns a greater-than-98% on-time delivery rate, so the steady flow of key parts is essential. In 2014, the firm began consolidating its distribution list to four suppliers to increase their respective spend with each and improve their “pull.” It submits weekly forecasts based on actual use, instituted bond and stocking programs, and meets weekly with those distys. It also has begun connecting with a few OEMs such as TI and Freescale.

The future. A one-campus company, Bestronics acknowledges looking at some NPI facilities outside California but has yet to pull the trigger on a deal. The firm also researched Mexico and China for certain programs, adding it is “not opposed” to expansion.

A Class 10,000 cleanroom is onsite for contamination-sensitive builds. It is also sectioning off a portion of Building 1 for medical product, an emerging market.

The day could come where Bestronics gets into plastic-injection molding, especially for product where the board is nested in the plastic. Additive manufacturing has been discussed for SMT fixtures, in order to cut delays and save money.

It has taken three decades for privately held Bestronics to reach its current revenue run-rate of $50 million to $100 million a year. It will never be the next Google. But perhaps it might be the place culture-driven organizations like Google turn for on-time product from an upbeat workforce.

Ed.: The print version of this article misidentified the SPI model. The correct model is the SJ Inno Tech HP-520 SPI.