The CIRCUITS ASSEMBLY Top 50 EMS Companies: Is EMS Headed for a Shakeup?

Do trade wars and mergers portend a coming changing of the guard?

Amid trade wars and uneven global economic conditions, 2018 was a solid year for electronics manufacturing services. We estimate worldwide revenue for EMS firms and ODMs increased about 7% year-over-year, reaching about $504 billion.

As always, there were definite winners and losers in the mix. The top 10 companies totaled about $340 billion in revenue in 2018. That’s down from our 2017 estimate, with some caveats. This year, we tried to correct for Foxconn’s non-EMS revenue (not an easy task). Also, currency fluctuations took their toll: The US greenback rose 6% against the Taiwanese dollar, which knocked billions in paper sales off the companies that report in that currency. In fact, the stronger dollar was a drag on the converted sales of most of the firms that report in their native currency (TABLE 1). 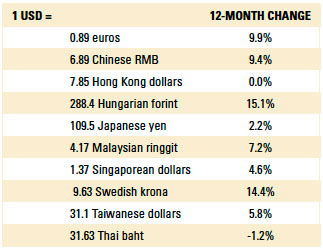 Currencies were impacted in part due to the bilateral China-US tariffs and the threats thereof. When the edicts were handed down in late August, the electronics supply chain went into a tizzy. As the pressure ratchets up, some $200 billion worth of Chinese goods are now affected, including smartphones, computers, semiconductors, printed circuit boards and assemblies. The duty rate was 25% as of May 10.

The tariffs could have a dampening effect on consumer products and white goods, given the high percentage that are built in China. The three-month-average change in US electronics production in March was 6.2%, and electronics imports fell $2 billion in the first quarter versus the previous year. Meanwhile, the 3/12 growth rate of China’s electronics production slid, while Taiwan’s surged.

Despite the chaos, several end-markets show promise. The global automotive electronics market is poised to reach $430 billion by 2026, a 9% CAGR, according to Acumen Research and Consulting, driven by demand for improved safety, onboard navigation, AV systems, and hybrid and luxury vehicles. Defense budgets are rising as well, and a series of high-profile airplane disasters have put newfound emphasis on safety improvements.

Mexico and certain Southeast Asian countries such as the Philippines, Malaysia and Vietnam could all benefit significantly from a protracted trade war. Indeed, major players such as Venture (no. 14), Cal-Comp (no. 15), KeyTronic, Nippon Manufacturing Services and ATA IMS are expanding in Asia outside China, and the big Taiwanese ODMs (including Foxconn) have begun migrating programs away from the mainland as well. Meanwhile, Flex (no. 6), Jabil (no. 8) and Sanmina (no. 12) are among the companies expanding south of the US border. Flex will expand existing plants in Tlajomulco de Zúñiga and Zapopan. Sanmina is opening a product design laboratory. All Circuits opened a state-of-the-art facility in Guadalajara.

Embedded financials. Many EMS operations are now buried inside corporate earnings reports. As the major players in the industry chase larger revenues, they are expanding outside traditional SMT and related operations. Complicating the matter, some that used to break out revenues by operations now do so by end-markets. For instance, it’s unclear to outsiders how much of Flex’s sales come from bare boards and materials (the former Multek business, now Sheldahl). Same goes for No. 33 Sumitronics (part of Japanese conglomerate Sumitomo). I don’t think Cherry would make the list anyway, but parent ZF isn’t going to disclose its EMS revenues either way. GBM has ceased separating its EMS and bare board fabrication sales. We are estimating the fabrication unit Hannstar Board contributed $350 million, meaning the EMS unit’s sales of $365 million are not quite enough to make the list.

No. 1 Foxconn is an industry unto itself. It has more than 35 major subsidiaries, plus scores of regional entities under those corporations. Among its holdings are Zhen Ding (no. 21) and Pan International (no. 30), both of which make the list as standalone players. It also counts Sharp and Innolux, Asia Pacific Telecom, Zeitec Semiconductor and Advanced Optoelectronic Technology, among others. Some of these companies are large and public; some are small and private. It’s impossible to know for sure the impact to discern Foxconn’s unconsolidated revenue. However, some estimates were made and deducted from Foxconn’s total.

Qisda is the parent of BenQ, a leading supplier of projectors and monitors, and has a stake in PartnerTech, which Scanfil acquired in 2015. Its ODM operations are formidable, but are they enough to make the Top 50 on their own accord?

On the other hand, Sanmina and PC Partner now state their actual EMS revenues. Such illumination is appreciated by the author, even if it means PC Partner doesn’t make the cut because the bulk of its revenue comes from branded products. Same too for Computime, which split its EMS sales from its smart solutions products, which includes its branded Salus line. The move bumped its revenue, as recognized by Circuits Assembly, down to $282 million. More fortunate is Compal (no. 4), which is owned by Kinpo Group, which also owns Cal-Comp. The latter has major production hubs in Thailand and the Philippines, where it plans to list on the Philippine Stock Exchange later this year. BYD Electronic (no. 10) now makes its EMS sales clear too.

Ultra Electronics made a play for Sparton before the US Department of Justice denied the merger on antitrust concerns. I’ve seen Ultra on some Top 50 lists. I tend to view the company as similar to DRS Laurel Technologies. There is certainly an element of traditional EMS work performed, but how much? Ducommun, another company in that space, breaks out its electronics revenue, but at $337 million, it fell short in 2018.

A handful of the Top 50 underwent changes at the top in the past 12 months, Flex, Benchmark (no. 17), Enics (no. 37) and Sumitronics (no. 33) among them. As of this writing, Terry Gou is also planning to step away from the day-to-day business of running Foxconn to run for president of Taiwan.

All but a handful of the companies in the Circuits Assembly Top 50 grew last year (TABLE 2). It’s getting ever more difficult to crack the list, sans a merger. The biggest gainer in percentage terms was IMI, while the most significant jump in actual dollars goes to Pegatron. Taiwan, with 11 entries, beat out the US and Japan, which had nine each (TABLE 3). 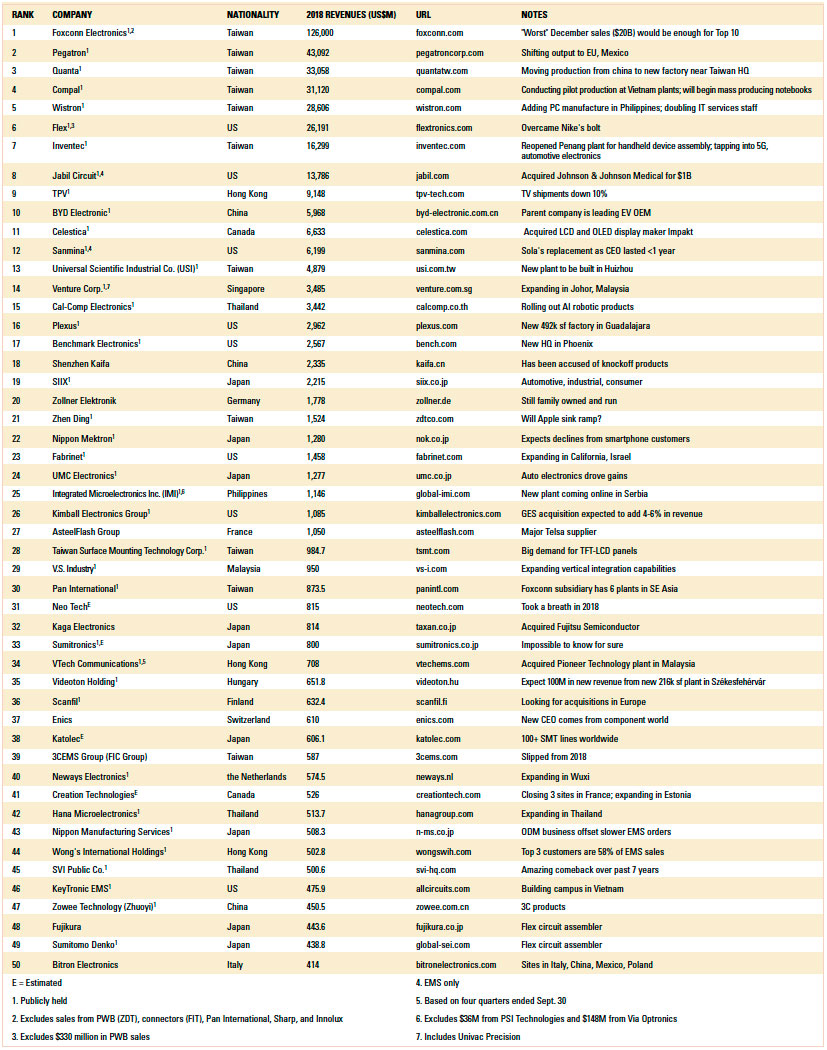 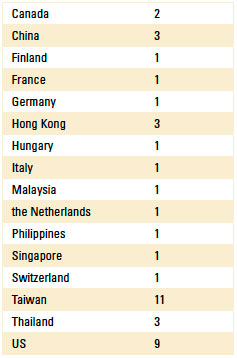 More M&A. Transaction activity picked up in 2018. Investment bank Lincoln International tracked 31 EMS deals for the year, up 48%, a number that is almost assuredly low. About half the deals were consolidations. Interestingly, despite continuing low interest rates, a boatload of private equity money, and a renewed drive to scale, the deals that did take place have been strategic and appropriately priced. We fully expect some of the smaller publicly traded EMS companies to either be taken private in 2019, or to merge with larger private entities as part of reverse mergers.

Of the larger deals, GPV of Denmark acquired CCS Holdings, pushing the merged entity’s sales to about $390 million and putting them in range of the Top 50 in the years to come. In the US, the biggest deal was SMTC’s acquisition of MC Assembly, pushing the merged entity into the $320 million range. In Asia, the largest transactions included the February merger of Denko Group and IMS Group, which formed a plastic injection molding powerhouse. Rebranded as ATA IMS Berhad, the Malaysian company generates an estimated two-thirds of its $554 million in revenue from non-SMT operations. And Camsing sold its entire equity interest in Fittec in November to Time Chain Holdings for $4.8 million. Fittec is the parent of Sheng Da and Fittec Suzhou and was once large enough to make the Top 50. No more.

While the perception is most electronics assembly is performed by contractors, in fact there’s a long way to go before that’s true. North America, for instance, has outsourced only about 28% of the total available OEM market, per an IPC study released last year. The trade group said the total available North American electronics assembly market in 2017 was $294 billion, of which $213 billion was performed in-house at OEMs. That bodes well for future growth, no matter where the supply chains land.

That said, most of the major regional economies are expected to grow faster this year than in 2020. As of this writing, China and US leaders are doubling down on tariffs, with no relief in sight. The situation adds complexity and risk to the already volatile supply chain. A shakeup in the world markets could be in order, and the Circuits Assembly Top 50 may look very different a few years from now.

As always, any errors are those of the author’s.