Who says a Tier IV EMS can’t have the foresight, and follow-through, of the big players?

Small tier EMS companies face many challenges, not the least of which is the ability to attract good workers and the access to capital to stay competitive. Generally, they don’t spend a lot of time thinking about models; that’s a practice for larger firms in which the executives don’t also spend time running the lines.

What small firms do understand, almost intuitively, is they can’t pay lip service to service. Speed counts. And niches count. Indeed, one could argue service, in itself, is a niche. SMT equipment, while sophisticated and highly engineered, is after all available to anyone who has the right amount of funds.

In that respect, Lightspeed Manufacturing has two niches. Its technical expertise lies in rework of ball grid arrays and other higher value components and assemblies.
And there’s the service component: President and founder Rich Breault has never met an order he wouldn’t turn around in 24 hours or fewer. He is a relentless ball of energy who spends hours each day talking with customers, suppliers, competitors, and just about anyone else in the industry who will answer their phone.

Based in Haverhill, MA, about 35 miles north of Boston, Lightspeed has been keeping other companies’ boards out of the scrap pile since 2003. (Breault also founded Netco, another Haverhill-based EMS, which he sold to Chase Corp. in 2000.) Its customers range from OEMs in the computing, defense, industrial, and more recently, aerospace end-markets, to other EMS companies, some large, some small. Lightspeed has customers throughout the Eastern seaboard.

The 8,800 sq. ft. factory maximizes its use of space, with hardly a square inch of vacant real estate to be found. In it are two full SMT lines, featuring DEK printers, Mydata placement machines, and Speedline Electrovert convection reflow. An SPI is next. Offline is x-ray and functional test. Breault keeps a close eye on spending, buying mostly gently used equipment, often at auction, and, if the price is right, occasionally well in advance of when he thinks he will need it.

During the past few years, Lightspeed has added more mechanical build and enclosure capability.

When we first toured Lightspeed in 2005, Breault explained that his goal was to take advantage of the high-flying Boston tech community by finding and teaming with an entrepreneur, perhaps one emerging from MIT or Harvard, and grow alongside them. His patience has begun to pay off.

In 2012, Lightspeed aided a program called the Haverhill  Hardware Horizons Challenge, a local effort to highlight potential engineered products, by offering several prototypes to the winners of the content. He then hooked up with MassChallenge, a larger and global accelerator program based in Boston. Lightspeed put a small lab inside the MassChallenge headquarters, giving Breault access to scores of entrepreneurs, many of whom had ideas for new hardware. There, Lightspeed provides production engineering assistance, along with a full bench of equipment, including soldering irons, Solidworks and AutoCAD software, a Sciencescope meter. One
exception: a Formlabs 3D printer. 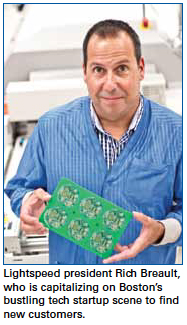 When MassChallenge moves next spring to a larger building, the Lightspeed Innovation Lab will grow with it. This time, Breault plans to put a full SMT line, including two Quad placement machines, a drill press and belt sander for mockups, hand soldering tools and other equipment on the same floor as the Challenge workspace, and staff it with a full-time operator, thus adding another level of capability (and giving himself a captive market of potential customers).

Through his connection with MassChallenge, Breault has landed four new accounts, including Bounce Imaging. Bounce is inventor of the Explorer, a low-cost handheld device full of embedded cameras and sensors that can be rolled into a dangerous environment in order to collect reams of data ranging from photos to temperature and CO readings, thus helping humans learn about – and avoid – potentially hazardous situations. The invention has been lauded by Popular Science and Time, among others. Bounce’s cofounder, Francisco Aguilar, says Lightspeed has been “essential” to Bounce’s success. “We could have been working on this for years. But it’s not just a question of time saved. We wouldn’t be if it weren’t for the MassChallenge and Lightspeed Manufacturing,” he says.

“We think that all this innovation comes from big companies with huge R&D budgets,” Breault notes wryly. “And in doing so we forget how innovation always changes things and levels the playing field. Through the MassChallenge, we constantly ask, ‘How do we help entrepreneurs build their dreams? And how do we get the ideas to reality and to market?’ ”

Too much growth too fast has foiled many an EMS player. The success of new customers like Bounce might push Lightspeed in ways the company isn’t currently designed to handle. In the event that Breault can’t keep up with a company that hits it big, he has a backup plan. “We want to partner with a Tier 1 to help them ramp,” he says. “And we want to partner with a machine shop and plastic injection molding manufacturer too.”

Breault sees a potential side benefit to the partnership as well: accomplishing big social goals. “My goal is to bring manufacturing jobs back to the inner city.” This shows unusually sharp and forward-looking vision for a small company.

In the six-year history of the CIRCUITS ASSEMBLY EMS Company of the Year, we have never selected a small tier company. It’s difficult for small companies to truly distinguish themselves. It’s even harder for them to establish a model and culture that can withstand changes in ownership. Whether Lightspeed could perform the way they do without Breault’s leadership remains to be seen. But his vision and execution has been sustained and extraordinary. And that’s why Lightspeed Manufacturing is our EMS Company of the Year for 2013.

Mike Buetow is editor in chief of CIRCUITS ASSEMBLY; mbuetow@upmediagroup.com.

Ed.: For a related article on MassChallenge, click here.