And why Thailand holds more promise than Brazil or India.

This is the 15th NTI-100 report, believe it or not. Readers know that over that period, the landscape of the printed circuit board industry has changed. A look at the data compiled in this annual article shows just how dramatic that transformation has been.

As in the past, the author started to collect company revenue data at the end of September 2012. He worked on it on and off for the past nine months, sometimes occasionally, sometimes intensely. In the past two months, the work has been very intensive since most Japanese financial data became available in May and June.

Compiling the NTI-100 becomes more difficult every year as globalization continues and most of the largest fabricators produce printed circuit boards in multiple countries and at multiple locations. Usually, design cost, die cost, shipping cost and insurance are part of sales revenue. (Some fabricators do not include shipping charges.) Most large flex circuit (FPC) manufacturers include in their numbers a substantial amount of FPC assembly, which is difficult to separate from the total output because assembly is very much an integral part of business for those firms. The assembly portion of revenue, if any, is eliminated from the rigid board fabricators. Therefore, the rankings are “unfair” when FPC and rigid board fabricators are compared, but there is no other way. The rankings, then, are “about” rather than definitive. The final judgment is left to the reader.

The table may contain some errors due to oversight or incorrect interpretation of data. The author takes full responsibility for any errors that may exist. Using this opportunity, he would like to express appreciation to those PCB fabricators that provided precious data, and the TPCA and CPCA trade associations for providing valuable information.

Assumptions. Revenues are based on fiscal 2012. Keep in mind, most Japanese companies end their fiscal years on March 31. AT&S also ends its fiscal year on March 31. Some fabricators such as Sanmina and MFlex end their fiscal years at the end of September. There were a number of acquisitions during the course of 2012. To make calculations easier, all acquisitions are assumed to have taken place on Jan. 1. For example, Viasystems acquired DDi on May 31, but its revenue is calculated as if the acquisition took place on Jan. 1.

To reiterate, many FPC fabricators, particularly large ones, engage in assembly. Since assembly is an integral part of their business and it is very difficult to accurately separate assembly-related sales from the total revenue, in these cases no attempt was made to separate the assembly portion. Known assembly revenue has been eliminated from rigid board fabricators.

Average exchange rates. Unfortunately, a common currency must be used for comparison. As usual, the US dollar is used (Table 1). Some discrepancies are unavoidable. For example, Taiwan PCB fabricators convert sales made in China from RMB to NT dollars. Each maker seems to use slightly different exchange rates, and Taiwan and China output are combined as “consolidated” revenue. Then, the author must convert revenues in NT dollars to US dollars. In so doing, some unavoidable discrepancies or errors occur.

To compare growth rates of each maker prior to converting to US dollars, 2011 revenues are recalculated using 2012 exchange rates (local currency comparison). Hence, 2011 data may be different from the last year’s figures. Be forewarned.

Thirteen fabricators in 2011 had revenues of $1 billion or more. There were also 13 fabricators in 2012, including two new entries and two dropouts. Kingboard Chemical PCB group and CMK fell below the mark. However, CMK became profitable despite the lower revenue thanks to its “select and concentrate” policy. Sumitomo Denko Printed Circuit joined the “NTI-100 $1B Club” thanks to brisk business from Apple. And Viasystems topped the $1 billion mark on the back of the DDi acquisition.

Because of the high value of the yen against the US dollar, Japan had the highest number of entries (28), two ahead of Taiwan (Table 2). However, because the yen is likely to remain at 100:$1 in 2013, Japanese fabricators will slide in the 2013 rankings, and some will likely drop from the list. Japan is the only country whose top fabricators lost revenue in 2012. The number of Hong Kong and China fabricators climbed to 25, almost the same as Taiwan, but the total revenue of these 25 fabricators in 2012 was only one-third that of the 26 Taiwan fabricators. Although Chinese fabricators are growing fast, there is still a long way to go. South Korean fabricators performed the best last year: a whopping growth rate of 25%. Without this, the 2012 world output would have been deeply negative. Samsung Electronics was and is the driver for the Korean PCB industry. 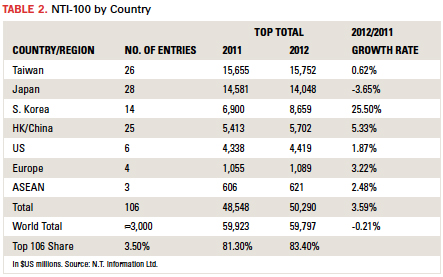 It is said that there are about 100 Taiwanese fabricators, although some have plants only in China. Their total output in 2012 accounted for 33% of the world output. Japan, which once enjoyed the top position with a 32% world share, is now down to a 22% to 23% share, a distant number two to Taiwan. Table 2 hints at this trend.

Table 4 is, of course, the NTI-100. Readers may note the absence of Biloda (鑫華寶訊). It turns out that Elitegroup Computer Systems (精英電脳), Biloda’s parent, sold it to a Chinese firm, which in turn shut it down. Elitegroup’s manufacturing arm is “英科技” in Chinese, which contains a PCB manufacturing unit. However, this author could not get data from this business unit.

BYD (比亜連) is a Chinese jack-of-all-trades manufacturer of batteries, automobiles, cellphones and flex circuits, among other things. The author saw an article that pegged its flex business at $250 million. However, since the revenue figure could not be confirmed, BYD was omitted.

Despite help from TPCA and CPCA, Taiwan and China fabricators are very difficult to figure out. Within China, a substantial number of mergers and acquisitions seem to take place, which makes it more difficult to collect “consolidated” data.

The trend of the Japanese PCB industry resembles that of North America. Today, the output of the seven largest US-based fabricators is greater than the domestic production of the other 300. To grow in North America, the only choice is to acquire competitors, unless fabricators are willing to invest in capacity, which this author doubts will occur, at least in the near future. In 2000, North America produced $12 billion and employed 97,000 workers. In 2012, the production was $3 billion, and employment was 21,000.

The European situation seems to be more or less the same as North America’s. Nobody in Europe is investing in capacity. Multek Germany is being shut down. eXception Circuit in UK was bought by Fast Print of China. Consider: 5% growth in Europe adds only $120 million to the top line, while 5% growth in China contributes $1.3 billion to the world output. According to its annual report, 74% of AT&S’s revenue was obtained from Asian operations (China, India, South Korea). It is shutting down its Klagenfurt plant; with that move, the last of the former Philips PCB shops will be gone: Eindhoven, Croydon, Evreaux (acquired by Aspocomp and shuttered) and now Klagenfurt. Since AT&S has built a large, new plant in Chongqing, China, more than 85% to 90% of its revenue is likely to come from Asia in the future.

This author is often asked about India and Brazil. Both countries have large populations and their electronics industries are growing. How about PCBs? Domestic fabricators have no ability to invest the large sums seen in China and elsewhere. It is too risky to invest large amounts in PCB manufacture in these countries because of the lack of infrastructure and, to some degree, the political situations. A shortage of quality water and electric power in India are disincentives to large international PCB fabricators. The political situation (taxes, etc.) in Brazil makes large investment impossible. Multek’s money-losing shop in Brazil was closed and its equipment auctioned. Result: One-half of Brazil’s output is gone. Hence, there is no chance any fabricators in India and Brazil will make the NTI-100 list in the foreseeable future.

KCE is building a large plant in Lat Kraban, Thailand, near the new Bangkok International Airport. When the last phase is finished at this new plant, the total production capacity of KCE is expected to be about 5 million sq. ft. a month. Potentially, KCE may achieve $500 million in output in the years to come. What is happening to MFS? Gul Technology has plants only in China. It has done fairly well considering its limited space. Shye Feng Group of Taiwan includes APEX in Thailand (separately stock-listed in Taiwan Stock Exchange), which is also doubling its capacity. Nippon Mektron’s Thai subsidiary, Mektec Thailand, built a new back-end processing plant in Thailand. Canon Components, which quit PCB operations in 2000, built a new plant in Thailand. Fujikura, which was devastated during 2011 “flooding of the century” rebuilt two plants, as well as a new one 28 meters above sea level. Fujikura is aiming to achieve $600 million output in 2015. Considering these investments, the PCB output of Thailand could match that of Europe in a few years. However, all large fabricators in Thailand are Japanese and Taiwanese. Therefore, KCE Electronics is the only domestic entry in the NTI-100.

The author assures readers that the 2013 NTI-100 list will be quite different from the 2012 edition.

Have you registered for PCB West, the Silicon Valley's largest printed circuit board trade show? Sept. 24-26, at the Santa Clara Convention Center. www.pcbwest.com