Defining and verifying printing machine accuracy, and how said accuracy relates directly to SMT printing applications — and some machine design and engineering considerations.

Printer accuracy must first be defined in terms of real and measurable printer parameters (such as machine alignment accuracy) and then verified. Tools used to verify printer accuracy include MCA, or machine capability analysis, and PCA, or process capability analysis, both of which are typically administered by independent third-party testing companies. Printer manufacturers may also have in-house accuracy checking tools designed for frequent use to maintain printing accuracy, as well as systems that communicate with an external solder paste inspection machine; such tools are designed to automatically correct registration errors based on closed-loop feedback from the SPI machine.

In the early days of SMT, nearly three decades ago, when technology transitioned from hybrid circuits printed on small squares of alumina substrate to FR-4 epoxy-glass, accuracy became a factor as board size increased. Those early SMT PCBs were single-sided, with the largest component typically a 20-pin QFP with J-leads on standard-pitch land patterns. The average size of any of these boards was perhaps 6" square, but this was still much larger than a hybrid circuit device. As the surface area of PCBs increased, so did print registration problems. Back then, wire mesh screens were used for printing solder paste, and they stretched during the print stroke due to squeegee pressure. They were followed by stainless foil stencils that were still mounted in a flexible border – a better solution, but not enough.
Today’s stencil foils are mounted directly to the frame. So the focus on accuracy, as assemblies became more compact and standard pitch went to fine pitch and then to ultra-fine, began to turn toward the stencil printer.

Higher accuracy in the machine means a greater tolerance to accommodate variations in other elements in the process. To the printer’s tolerances, we must take into consideration variations in batches of boards/fiducials, variations in stencils, and any variations introduced by other process elements, whose effects on the overall accuracy of the printing process are cumulative. Variations must be added together; the sum will be the true accuracy of the process, and the lower that overall number, the greater the probability of building a robust, stable, repeatable, high-yield, low-defect printing process.

Printer accuracy begins with design. A structurally stable printer is key to maintaining repeatable accuracy at high speeds, when the acceleration/deceleration forces of components within the machine are greatest (FIGURE 1). Stability dampens vibration, which itself can negatively affect accuracy when such tight tolerances are being maintained. Rigid positioning of the PCB that will be printed is also critical; one does not want it moving at all once it has been aligned with the stencil. For this reason, PCB clamping systems are used to keep the board tightly secured in place during print processing (FIGURE 2). One such system uses a side snugging technique. Flippers engage to secure the board across the top edge to ensure board flatness and remove warpage from the board. The z tower raises the board to the programmed height based on board thickness; software-controlled snuggers clamp the board edge across the entire length of the PCB, and then the flippers retract so that there is no interference with full board-to-stencil contact. This technique addresses two issues: the first is rigid positioning of the board for optimum print accuracy, and the second is achieving optimal stencil-to-board gasketing for a good print. This approach is well-suited to thin PCB printing applications. 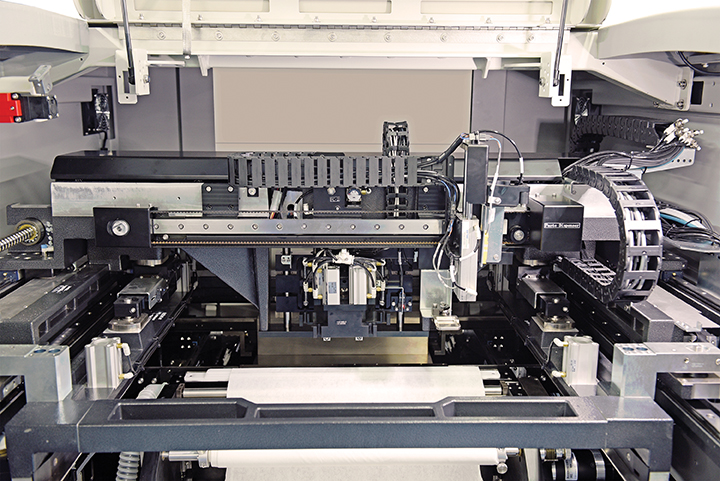 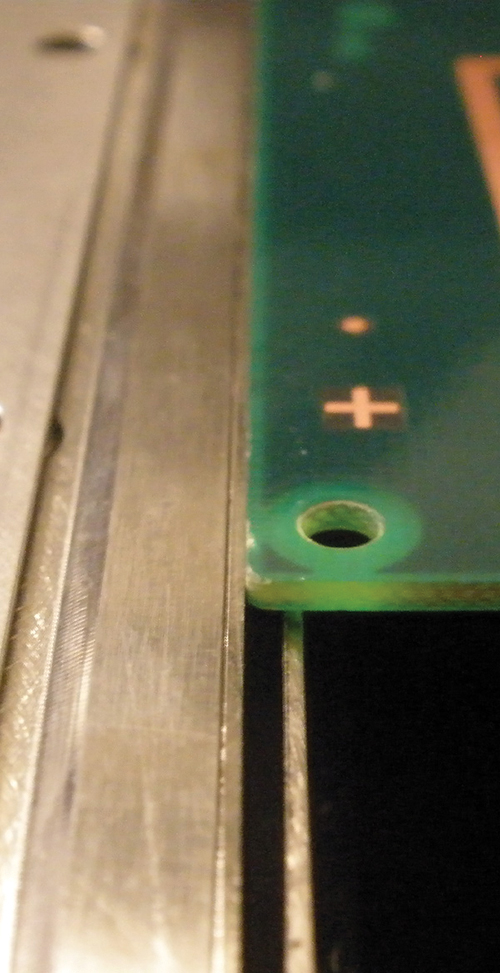 Figure 2. Secure fixturing of the PCB will maintain tight positioning accuracy during the various stages of printing.

Another design-related contributor to printer accuracy is reduction of unnecessary motion of parts and systems within the machine. For example, reducing the amount of z-axis height travel for such elements as the print head, if that amount of travel isn’t needed, can enhance stability and, again, reduce vibration for improved accuracy, particularly at high-speed, high-volume printing.

To be sure, the accuracy of a stencil printer is not solely decided by the precision employed in machining its various moving parts. The value of a production printer is not in perfectly printing a single board, but in printing hundreds and even thousands of boards that follow with the same quality outcome as the first. Thus, different factors affect long-term and continued accuracy, and one of these is the software controlling the machine.

Software is designed to control machine operation, as well as assist in keeping it operating optimally, just as an auto-pilot system is needed to make small course corrections in a ship’s heading when underway. Many different factors can contribute to a printer “drifting” out of registration over time; these range from the aforementioned machine tolerances to temperature changes in the manufacturing area, stencil stretch and deformation, and more. Most can be addressed to some degree but not eliminated. Thus, keeping the printer on course can be achieved by occasional printing process checkups using automated inspection technologies such as SPI.

SPI directly downstream of the printer automatically checks the newly printed board for paste height on pads, paste insufficiencies, bridging, and other defects that are a direct result of printing problems. These problems are not all related to print registration, but misregistration is one of them. Software and advanced communications today allow the SPI machine to communicate directly with the printer through a specially-developed common interface. Simply put, when the SPI machine sees x, y and theta offset problems on PCBs being printed, it analyzes the data almost instantly and gives the printer instructions to correct those offsets, automatically and on the fly without operator intervention. Big changes aren’t made all at once; each time a PCB is printed, the offsets are incrementally corrected until, after a few boards, print deposition is zeroed-in where it’s supposed to be on the pads. This is especially useful for fine-pitch/fine-feature print process optimization. However, if the printer is not printing to factory specifications or is out of adjustment, inspection and closed-loop feedback will work overtime and never get the printer printing consistently well or repeatably, at least not as much as it should. The printer quite literally doesn’t “know” that it is out of adjustment. This is where MCA testing comes in.

MCA testing. Machine process capability analysis confirms printer performance in term of mechanical accuracy and stability. This test proves the stability (repeatability) of the printing process using specific tools. Manufacturer (or customer) specifications are used to qualify the equipment. MCA testing proves and verifies a printer’s accuracy, without ambiguity. There are two types of MCA testing employed to determine whether a printer is mechanically accurate when printing: One method is homegrown; the other involves testing by a third party. While third-party testing provides an unbiased, dedicated and independent method, it is expensive to use frequently. In many cases, printer OEMs will purchase the tester and its dedicated glass plate fixtures to perform tests within their own facility on new printers, or ones being refurbished or rebuilt. But this doesn’t solve the user’s need for frequent, affordable testing for print process optimization. For that, there are tools such as one printer manufacturer’s accuracy checking system.

OEM printer accuracy check. A homegrown printer accuracy testing method enables quick, inexpensive verification of precision and repeatability. As an option built into the printer, it’s available any time and is far less expensive than independent third-party testing, but is not as precise a verification. Eventually, one may have to bring in third-parties (auditors), but using it could reduce that frequency significantly. The homegrown method uses the alignment fiducials and print verification pads on the user’s PCB (or a special test PCB supplied by the printer manufacturer) to verify alignment accuracy. These verification locations are user-definable, as are the user’s upper and lower process limits. A user inputs these locations and limits when launching the program. It measures targeted paste deposits, and compares them to the verification locations using the printer’s software program and machine vision (camera). It will then automatically locate both the pad model and the paste model simultaneously, resulting in a measured print offset. The method was proven accurate by the OEM by comparing the print verification data generated by the test to years of third party (CeTaq) data before the option was released for customer use. While not a replacement for independent testing, it does give the user the ability to know the printer is performing accurately and reliably on a daily basis, to user-defined tolerances based on a test PCB or actual production PCB.

This testing measures performance. Should results begin to vary, or accuracy begin to wander outside of acceptable tolerances, it may be considered an early warning indicator that the printer needs examination by the factory or authorized distributor service professionals. The testing provides the user with the measure of machine performance repeatability, which is most important for a printer, and can’t be influenced by software. Software can and does influence and adjust total machine accuracy (offset). Accuracy is important for precise offset-free printing but is not built into the machine, as is repeatability. Thus, this test is essentially PCA, whereas MCA measures the innate accuracy that is built into the machine. Evaluation of a printer’s accuracy and process potential must include both, ongoing.

MCA tester integrity. With the CeTaQ test procedure, the stencil and squeegees are installed and configured in the machine. The board is loaded and clamped; fiducials marks are identified by the camera. Once the board is printed, the glass board is inserted into the testing machine, which measures positioning accuracy (x, y) and evaluates the results. A minimum of six boards are printed and measured. Results are then pooled and analyzed, depending on printing direction. Printing offsets of angle between board and stencil can be determined at this state. Some corrections are applied into the machine software (x, y or theta) and a batch of boards is printed again. Once the corrections are done and the process becomes stable, a minimum of 20 printed boards without any process/machine modifications is necessary to evaluate the stability of the process. When the measurement is completed, statistical results and graphical analysis are exploited to evaluate machine performance. The stability of the printing process is proven. The machine is able to print product within the original quality specifications set forward by the manufacturer. The measurement system and glass boards are calibrated using international metrology standards. Most important, the testing ensures the printer is performing within the machine manufacturer’s claimed specifications.

The third-party-administered MCA testing was used to verify the accuracy and repeatability of a new printer. The measured values were determined with CeTaQ’s CmController. The results are shown in TABLE 1 and FIGURES 3 to 6. The printer demonstrated 8µ alignment, with 15µm wet print repeatability (>2 Cpk @ 6σ) based on 360 measurements taken with a 95% confidence interval. This represents a 25% improvement in wet print accuracy over current best-in-class machines.
Variations in different elements in the printing process, e.g., PCB fiducials, stencils and other factors, ensure there is no such thing as a printer that is “too accurate” for any SMT assembly application. A high degree of accuracy, combined with tight process control and optimization, will ensure a robust and repeatable printing process so that the full value of a production stencil printer may be obtained. 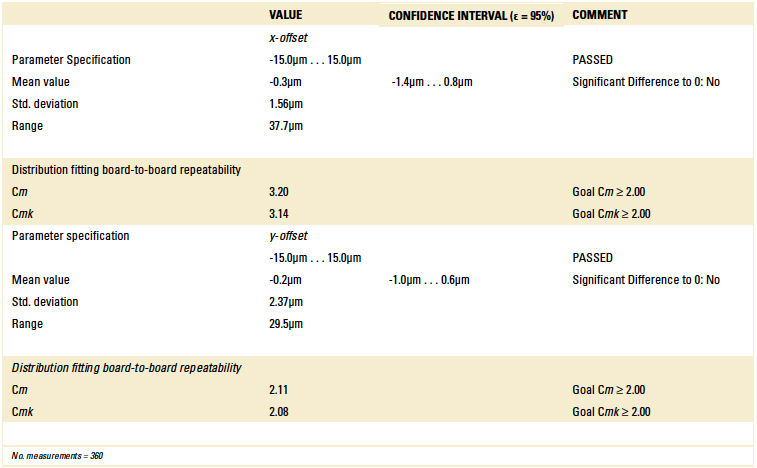 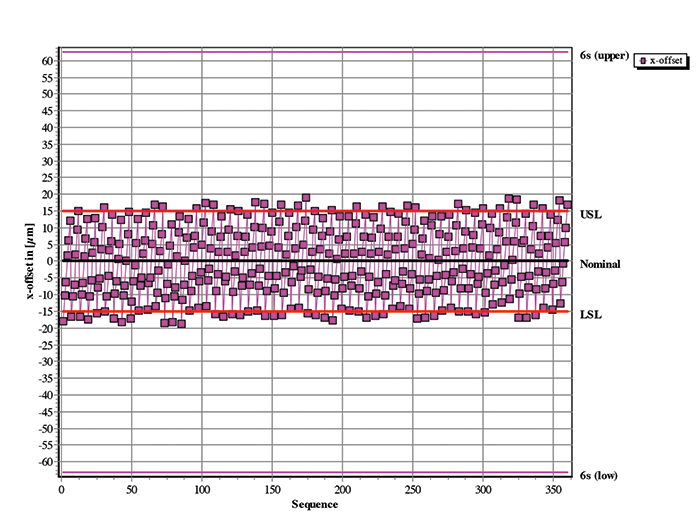 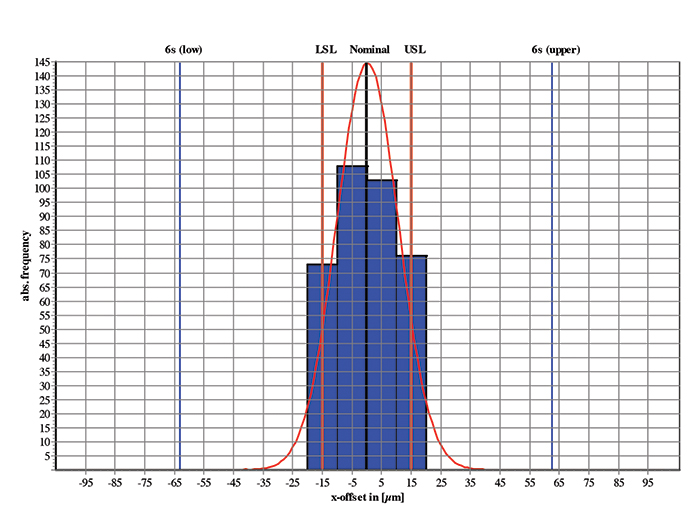 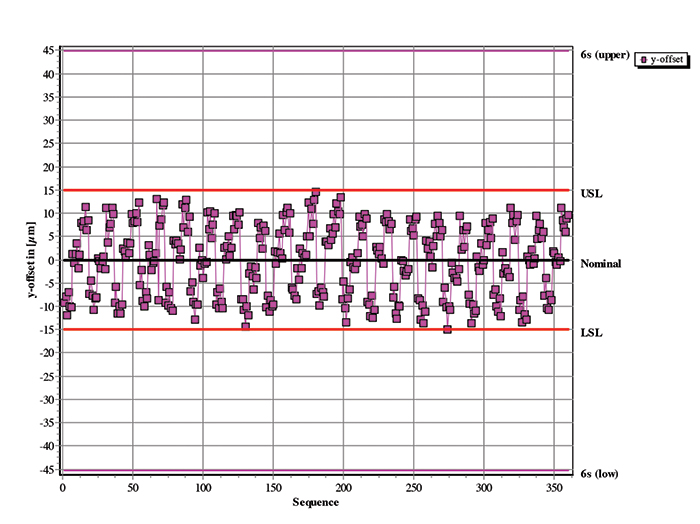 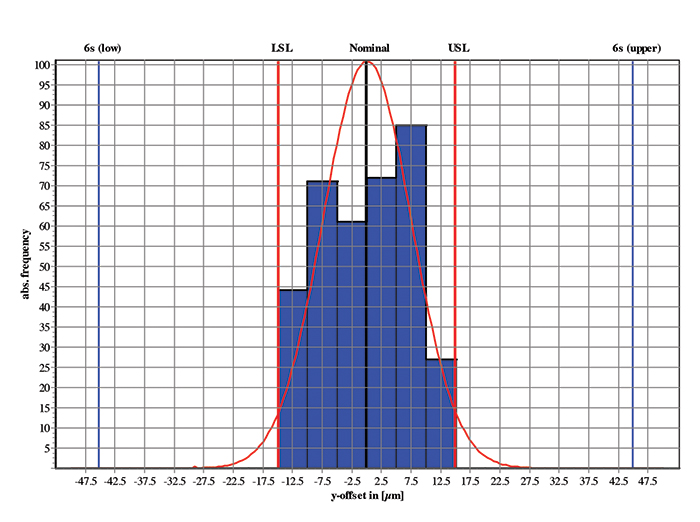