Effects of a Dual Nozzle on Process and Quality

A means for performing an entire production run in a single pass, using a single program, without the need to swap nozzles.

Until recently, standard selective soldering machines used one nozzle at a time in a program. Although there are multiple soldering sites on any given PCB assembly, the process engineer had to choose a nozzle that could accommodate the smallest soldering site on a given board. That’s difficult, because midrange, complicated printed circuit assemblies have a range of multiple through-hole component types, all the way from single LEDs up to massive connectors, power supplies and torroids.

But the smallest site on the board, such as an LED, may also be surrounded by surface mount components and thus have a keep-away zone spec. This limits the nozzle size for the balance of the board, even though it would be more desirable and more practical in many instances to use a larger nozzle that could put more thermal energy into the board for better and faster soldering of larger components.

What’s the alternative? Running production in two passes, first with a small nozzle to take care of the smaller components, then again after switching to a larger nozzle to accommodate areas that require the larger size, and with a separate program for the larger nozzle. The interruption in production, as well as running the entire batch of assemblies through a second time, is hardly desirable.

An alternative would be the use of very large, highly automated, expensive selective systems, but these can only be justified by very high-volume long-running production. Dual-nozzle technology (Figure 1), however, performs the entire production run in a single pass, using a single program, and without the need to swap nozzles. The program will direct the smaller nozzle to the appropriate components on the board that need it, and then shift on-the-fly to the larger nozzle to accommodate those components that can benefit from it, and that also need the greater thermal energy supplied by a larger wave. Not only does one save time, but using the proper nozzle size for the job ensures better quality. 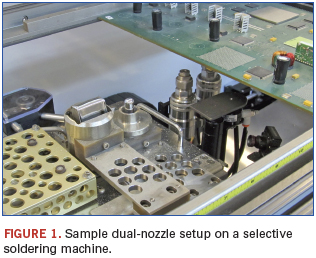 Certain caveats are involved in dual-nozzle soldering. The first is the necessity of a robust mechanism, ensuring repeatability of the nozzles when toggling one to the other. Also, extremely important (and one cannot overemphasize this), preheating the nitrogen and delivering appropriate and proportional amounts of nitrogen to each nozzle. Preheating the nitrogen to the solder temperature is absolutely essential, as it keeps the nozzle at the molten solder temperature. The failure to keep nitrogen at the liquidus solder temperature tends to cool the nozzle as solder flows up the nozzle stem, and thereby introduces a variable into the process that can affect repeatability and process control.

The advantages are apparent. For example, if restricted to a small nozzle – let’s say, a 3mm nozzle – to solder the entire board, but have a multi-row connector, four or five pins wide, with 100 pins in a row, you might be able to solder just one row at a time, dragging slowly down each row. Result: Each row would be soldered individually – and slowly, because the thermal energy in that nozzle is very limited. This would greatly increase the amount of time required to process each assembly. A single pass with a much larger nozzle would get the job done faster, and all at once, for that multi-row connector. The larger nozzle would be able to span all four or five rows and solder them simultaneously, and do so at a higher speed, thanks to the availability of a greater amount of thermal energy in that larger wave.

Successful dual-nozzle selective soldering depends on a good, optimized soldering program, as well as a robust mechanism and understanding of the need to eliminate variables (e.g., preheating the nitrogen). This is why its benefits – improvements in speed, reliability, and repeatable enhanced soldering quality – make it popular among an increasingly larger circle of users.