The Risks of Electronic Hardware Exposure to Disinfectants

During the pandemic, cleaning and disinfecting common areas and surfaces to protect and remove the Covid-19 virus and all other viruses and bacteria has become urgent. During this time manufacturers have turned to professional cleaning services or have assigned facilities departments the responsibility of properly disinfecting areas. Adding corrosive chemicals to the working environment is a new condition. While the CDC issued guidelines for human exposure and documented the timing and conditions when workers can return to a work area after fogging, spraying and disinfecting, it missed the understanding and risk of contamination these corrosive chemicals can cause to exposed electronic hardware, components, material in production and production equipment. Below are case studies showing the chemical effects and residue patterns negatively impacting hardware and operating conditions.

As the pandemic altered our world, we learned and isolated in ways we never expected. As the SARS-CoV-2 virus spread, manufacturing facilities closed worldwide to help slow the spread of the disease. Scientists and engineers sought methods to safely reopen factories, prioritizing the effectiveness of disinfecting methods for the health and safety of the employees. Possible reliability impacts to electronic products and equipment were typically not of highest consideration. The initial unknown nature of the virus, its mode of spread, and length of time it lives on surfaces resulted in a need to apply disinfecting agents to the environments where people are exposed to other people.

Wearing masks and isolating proved effective at reducing the spread, but there’s another side to disinfecting the areas where people work, live and play to allow the store, diner, office and manufacturing centers to return to normal operations. Many professional services offer disinfecting and cleaning for virus reduction, and they are easy to find and schedule (FIGURE 1). It is an important health and safety issue that all areas are cleaned and disinfected – all common spaces and working surfaces that put people at risk for exposure to the virus, but the risks should be understood.

Those who professionally disinfect areas wear protective clothing and respirators designed to eliminate the risk of exposure, and they disinfect when people are not present. Again, they are following the chemical/equipment manufacturing requirements for broadcasting disinfectants, many of which are corrosive chemicals.

There are sprayers, foggers, application spray bottles and wipes for surfaces. Each method permits deposition and volatilization of chemicals over time. Most disinfectant applications are not applied directly on electronic hardware, but because of the complexity of these operating electronic systems, they may have draw-fans pulling air across the system to cool operational components (FIGURE 2). This air intake path allows airborne contaminants to be deposited on electronics. 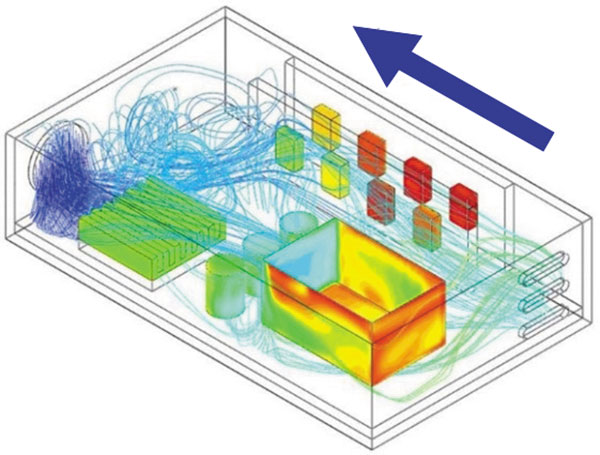 When electronics manufacturing facilities are fogged to cover large areas where electronic hardware is being produced, these pre-functional systems are exposed, and these surface residues are deposited and sit on surfaces until the units are powered up in the field (FIGURE 3). The effects of these residues pose a great risk of parasitic leakage, electrochemical migration (shorting) and corrosion issues. 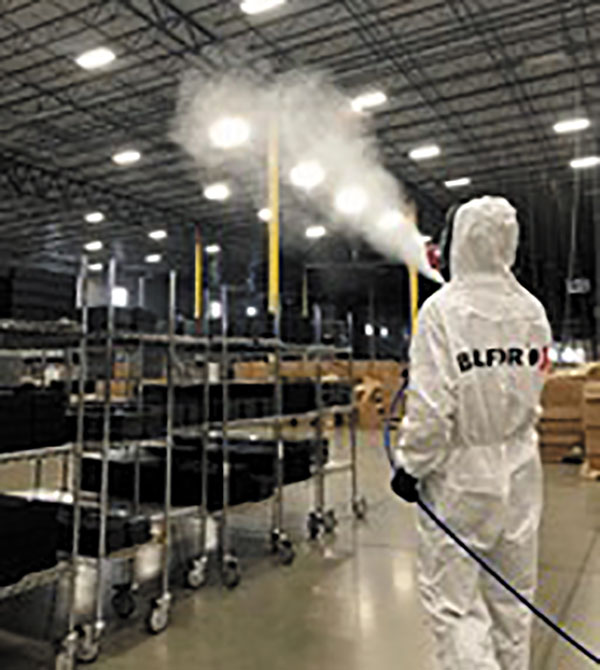 Figure 3. Aerosolized disinfecting surfaces. The lack of specific control over the fog ...

When fogging large production areas and office locations, airborne disinfectants not only travel to the general locations but are drawn into the HVAC air handling systems, redepositing this contamination throughout the system. (Air filters will capture the initial microdroplets, but as they dry the chemicals outgas and are delivered to working areas as gases onto electronics.) Even when hardware is tented or covered during fogging, the risk of contamination to hardware and systems grows every time the area is disinfected (FIGURE 4). 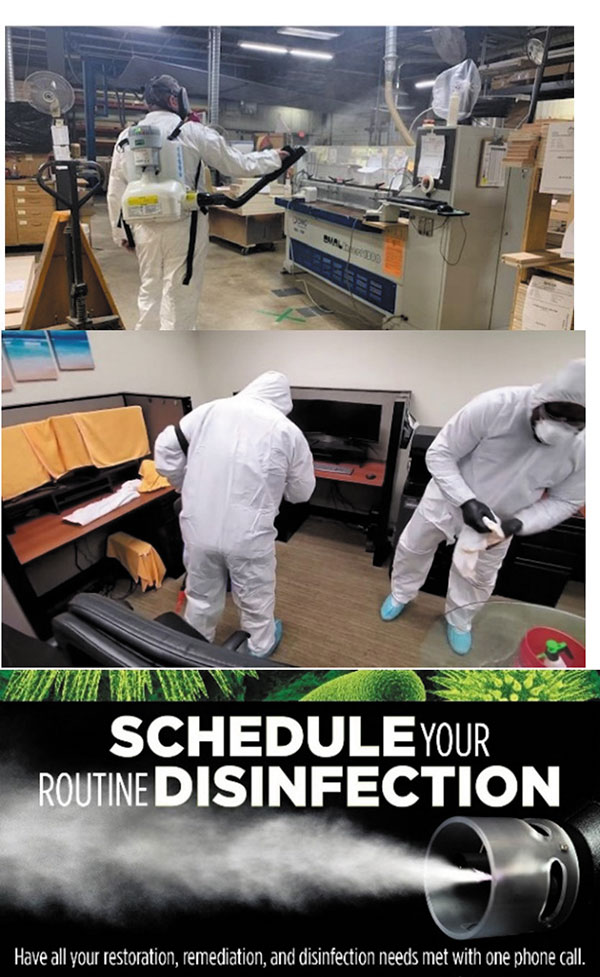 In the first case study, medical areas with tented equipment in surgical suites fogged with disinfectant to remove bacterial, viral and biological contamination created a sterile environment for patient and staff protection (FIGURES 5, 6 and 7). The use of an aerosolized disinfectant is an effective, fast method of applying the disinfectant (typically a corrosive residue) to large areas, but each professional person is well protected by personal protective equipment (PPE). 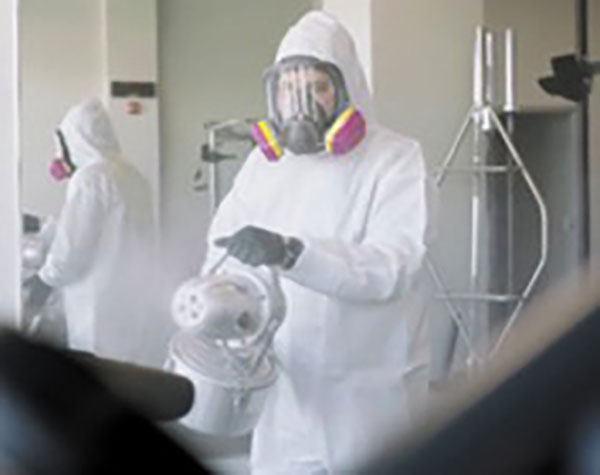 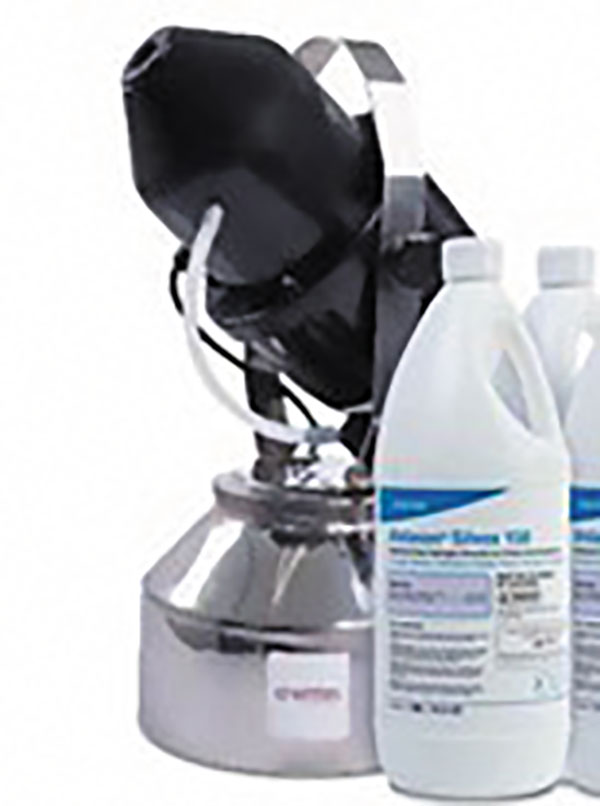 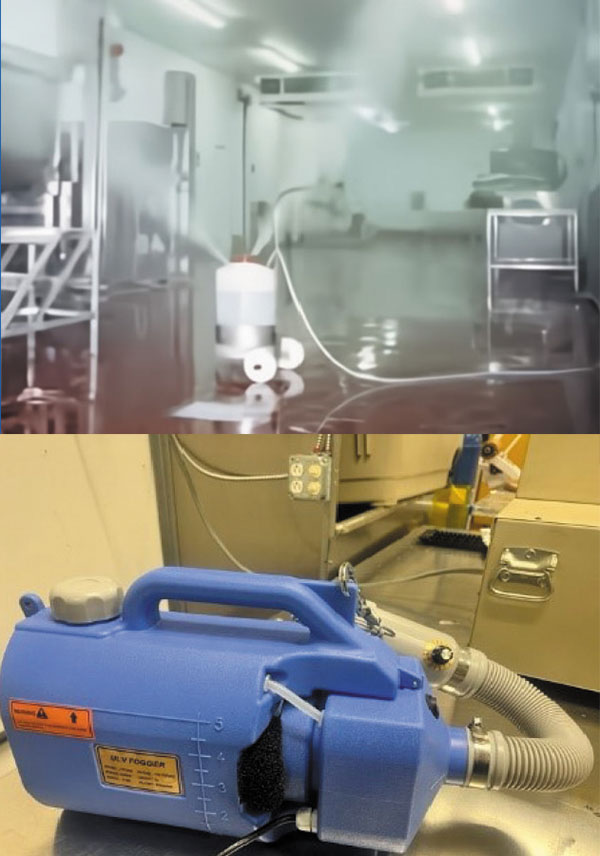 In this case, we show data on equipment in the tented suites in standby and ready-for-use states. The electronic equipment was tented with surgical draping cloths and was not exposed directly to the disinfectant fog (stationary units to fog the entire room), which ran for 15 minutes, then was allowed to sit for 15 minutes before people could reenter the room. The functional problems in this case appeared after one or two fogging exposures created by the moisture-laden disinfectant floating throughout the space.

Exposed hardware from the surgical suite – 30 days in the field with four exposures and two exposures of fogging – was compared to current production samples (FIGURES 8 and 9). Hardware failed in a critical respiratory control system (TABLE 1).

Figure 8. PCBA 1: four fogging cycles, exposure on the bottom side of the PCBA.

Figure 9. PCBA 1: two fogging cycles, exposure on the bottom side of the PCBA. 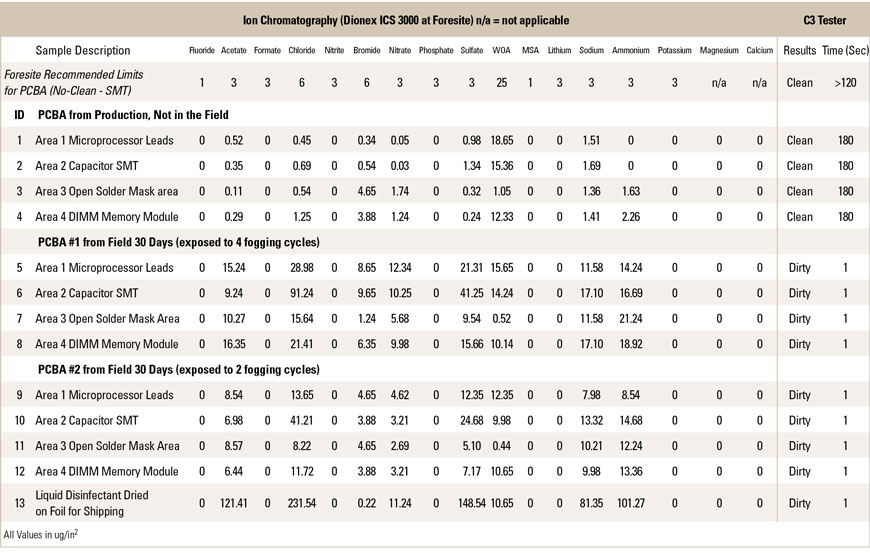 Upon review of the localized extraction results and electrical test, new hardware exhibited acceptable residue levels and good, “clean” C3 results. The two field samples with different exposure (fogging) cycles experienced catastrophic failures and were returned for failure analysis. (These are real field applications, not experiments.) The resulting failed hardware in the field led to corrosion due to external contamination caused by the exposure from fogging with an aerosolized disinfectant. 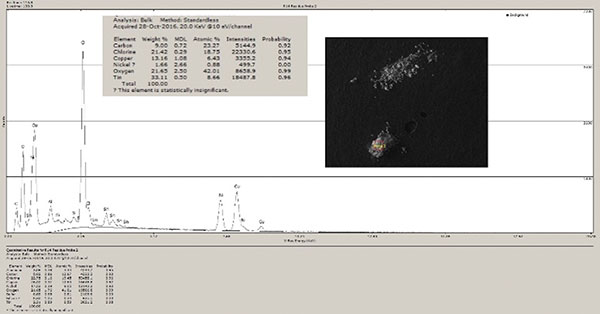 Figure 10. PCBA 1: four fogging cycles, disinfectant exposure on the bottom side of the PCBA with cooling fans showing high chlorine residues from debris on top of resistors (not from process residue) (no-clean = WOA)). 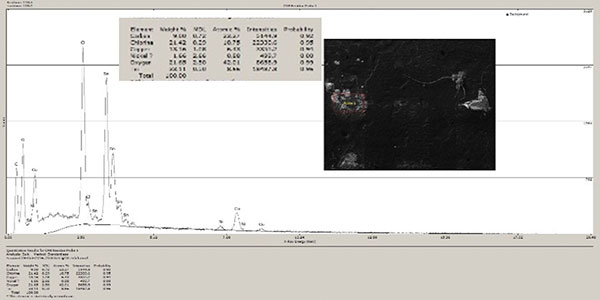 Figure 11. PCBA 1: two fogging cycles, disinfectant exposure on the bottom side of the PCBA with cooling fans showing high chlorine residues from debris on top of resistors (not from process residue) (no-clean = WOA)).

Hardware in production and engineering areas was exposed to fogging. The samples experienced ICT and functional testing failures two to five days after fogging the production area (FIGURES 12, 13 and 14).  Each of the areas was inside a 50,000 sq. ft. production facility and selected in relation to the main aisle fogging areas. 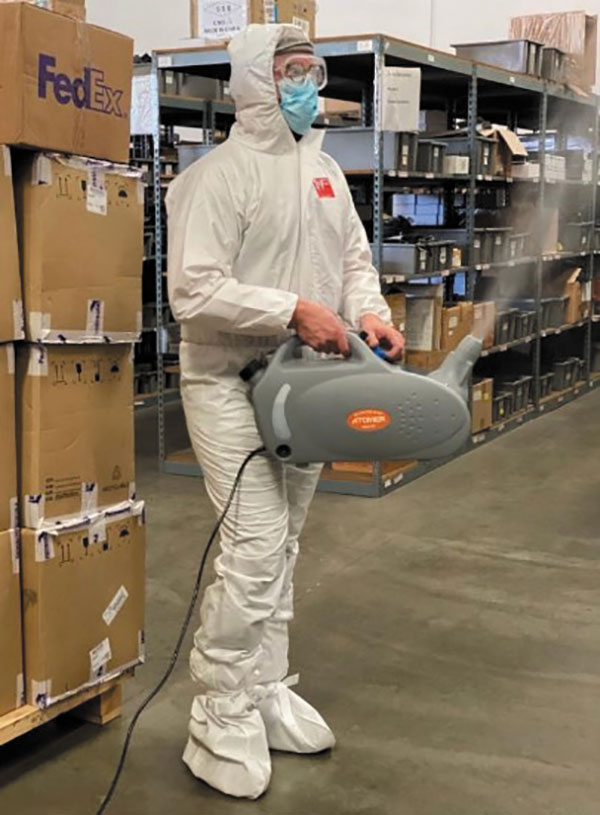 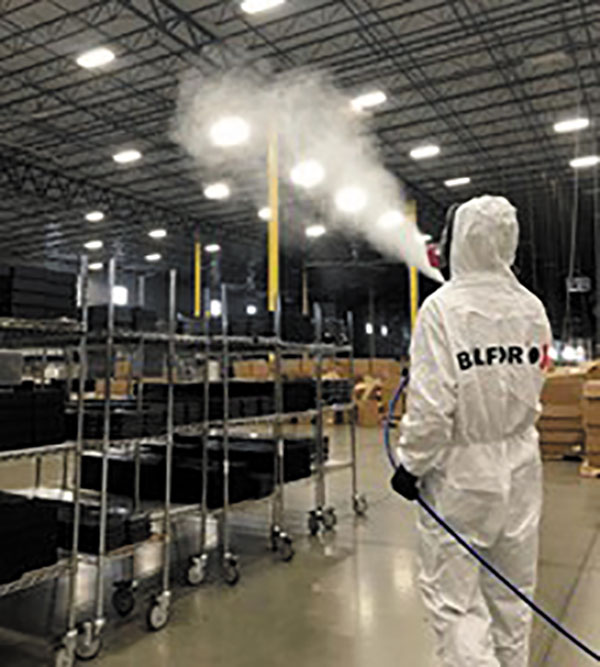 Inspection of the areas showed no visible signs of fluid on the floors and rack surfaces, but small droplets appeared on box surfaces three days after fogging. The ESD plastic trays and tops of components showed tiny dry spots on the surfaces that were open, but not on the samples below the top layer. The residues of the disinfectant chemically matched the residues on the trays and top layer of the PCBA surfaces (TABLE 2). These residues are corrosive and moisture-absorbing after they dry. 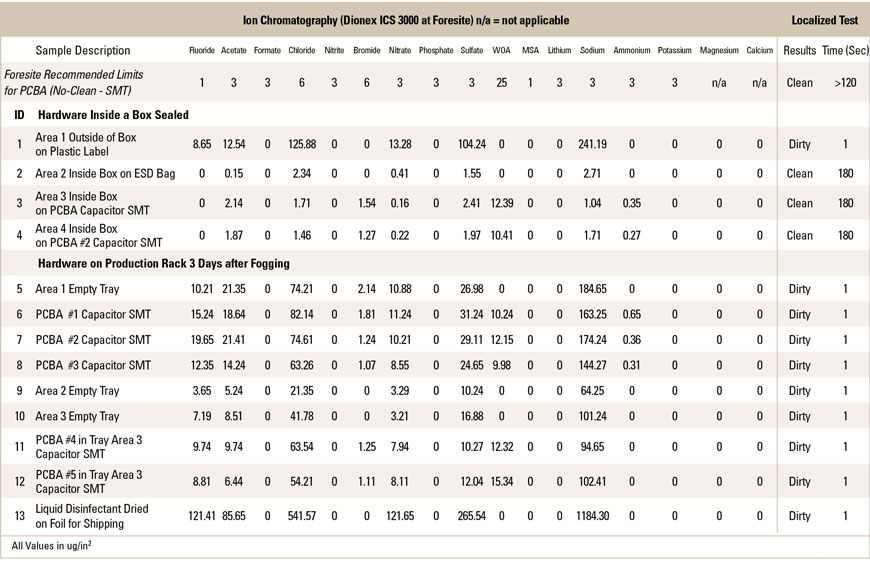 Figure 15. Areas not covered for fogging. 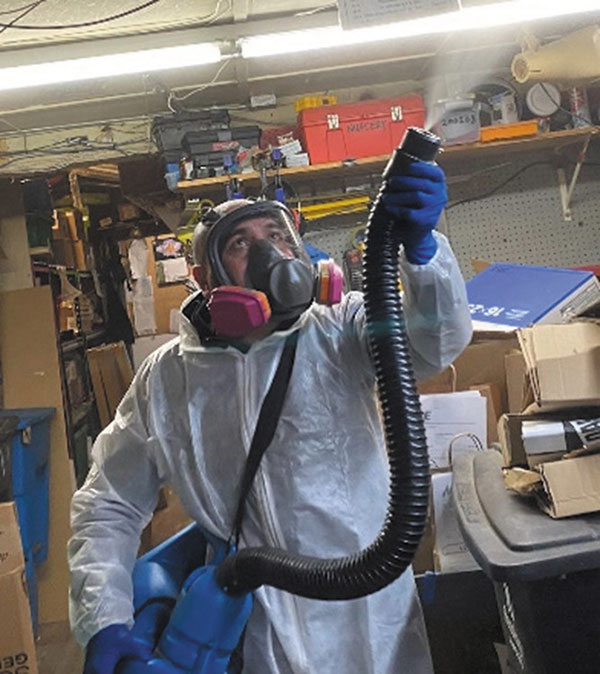 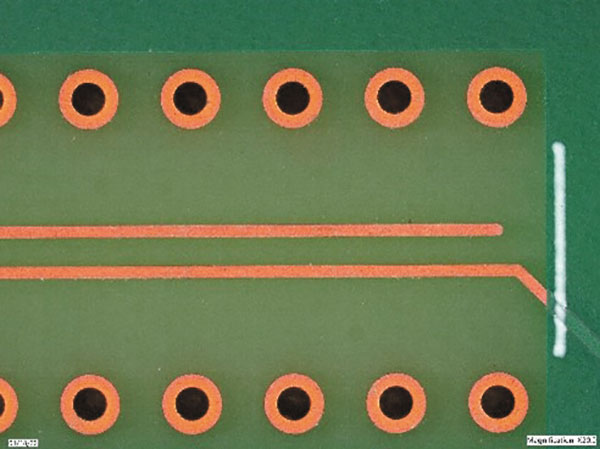 For high-reliability and RF products, even small amounts of parasitic leakage can cause a change in impedance of the circuit, causing undesirable results. Exposure of the work area to fogging while the PCBAs were a work-in-progress prior to potting in silicone for ruggedization caused long-term impedance changes in the circuit that were only brought about through temperature cycling in end-use after several months. 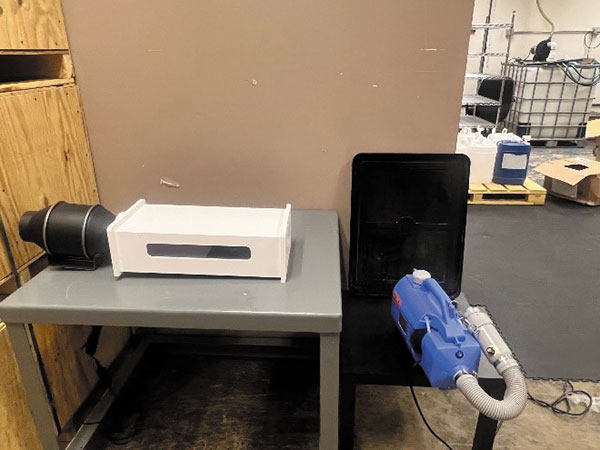 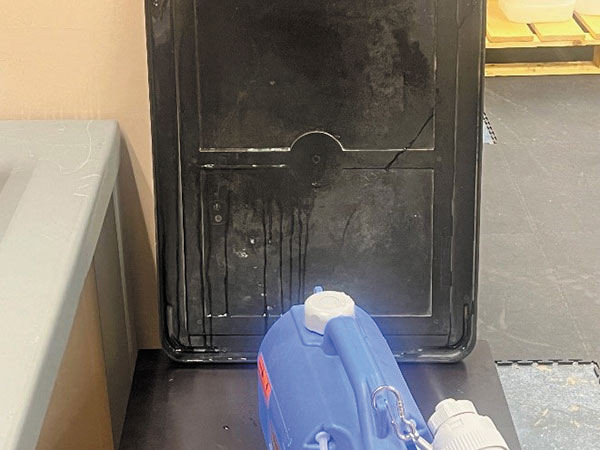 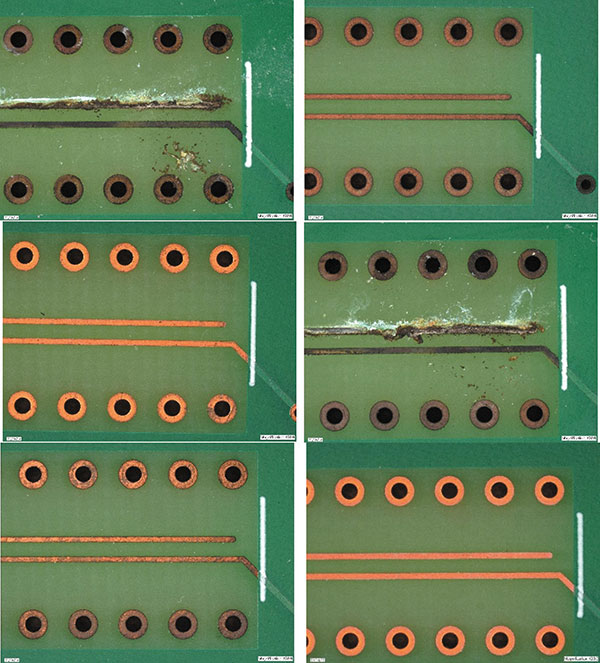 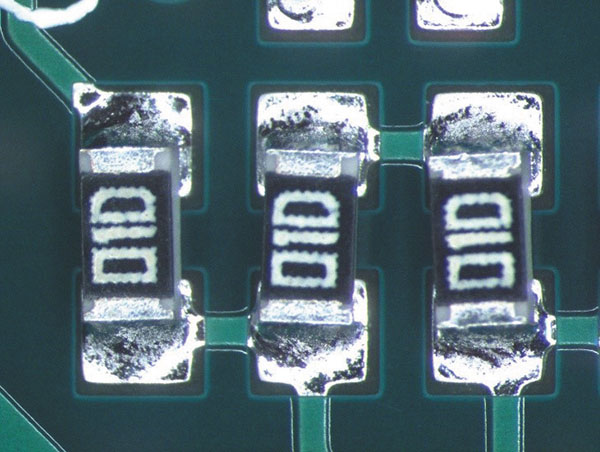 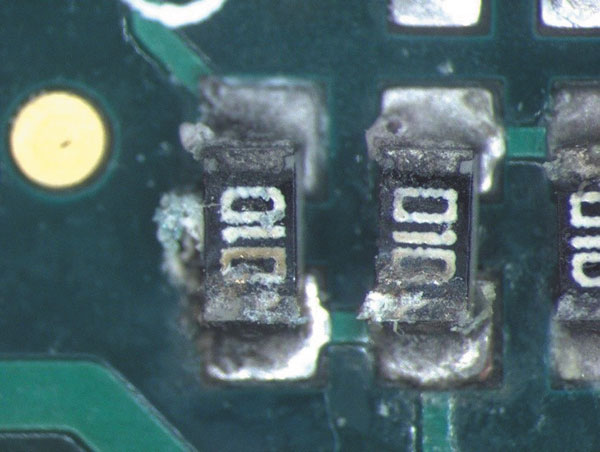 Board inspection showed no visible residues from the fogging, and resistivity of solvent extract (ROSE) testing at a full board level showed an acceptable amount of ionic contamination as a result of the large surface area being measured. The contamination was at a level in which the corrosivity was not enough to be detrimental to the PCBA in the short term. Therefore, the issue was not caught during ICT or functional testing.

Although tenting WIP trays was done at the manufacturing site, only the top and most of the sides were covered, leaving some units much more exposed and prone to future failure compared with other units processed at the same time. The photos show the cart tops were tented, but ESD work surfaces were not, creating a transfer point. Disinfectants do not negatively impact ESD but are easily transferred with direct board contact to the ESD mats or tools. 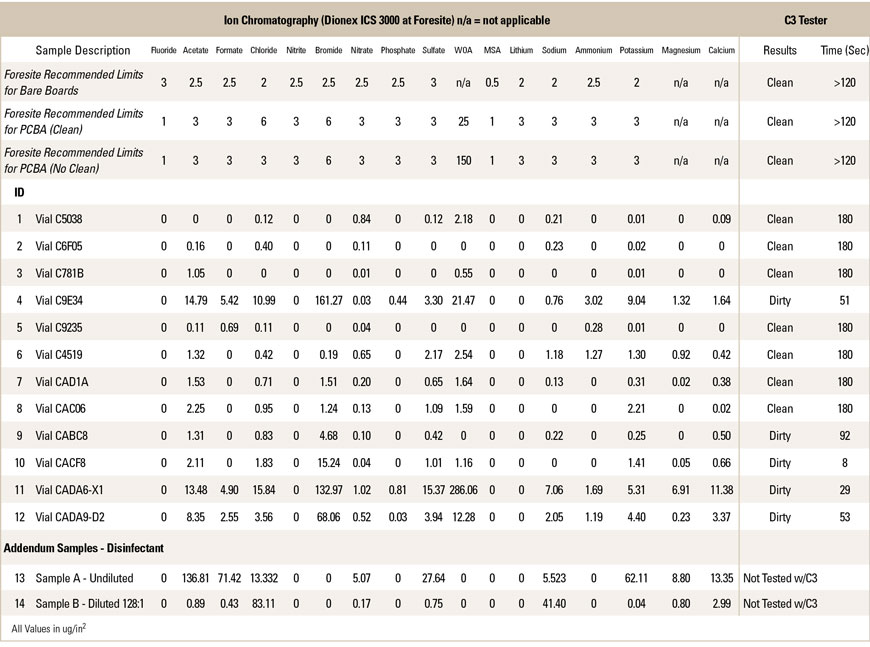 Samples tested by localized (site-specific) extraction showed poor, “dirty” C3 performance, and three samples from a cycle within three days of fogging showed the same chemical signature as the disinfectant that was fogged. The samples with high levels of contamination were field return samples, while the others were from different stages of new build production.

Since disinfecting near or around electronics has become a common periodic event to prevent normal workers from virus exposure, it is time to understand the environmental effect on electronic performance caused by these methods of disinfecting. This case study analyzes the deleterious effects of common chemicals used on and near electronic systems when delivered with ultra-low-volume (ULV) fogging systems. The analysis includes surface insulation resistance (SIR) of test boards with four test locations per board with no-clean flux residue on the assembly and local ionics testing the mobility of the ions present.

Findings. The samples exposed to fogging with a draw-fan permitted residues from the disinfectant to create deposits on the surface of the test coupons, which failed SIR testing for the hypochlorite, hydrogen peroxide, benzalkonium chloride and thymol oil. All disinfectants were diluted with tap water, which is the recommended dilution material for the ULV foggers. The IPA and control with no exposure both showed good, passing SIR results. When this location was assessed by localized extraction and tested by ion chromatography, it showed corrosive effects as well on the four chemicals that failed SIR. The residue levels of these chemicals showed a large deposit of contamination from the tap water, as well as the disinfectant chemicals. The IPA showed a good, clean, localized test and passing SIR, as did the control. These corrosive residues collect on surfaces and set up corrosion cells, causing intermittent performance and failing hardware in the areas where fogging occurs. 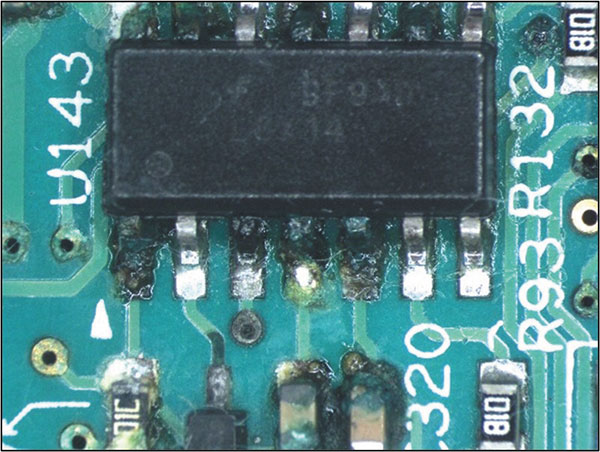 Figure 23. Four fogging cycles. Exposure on the bottom side of the PCBA. 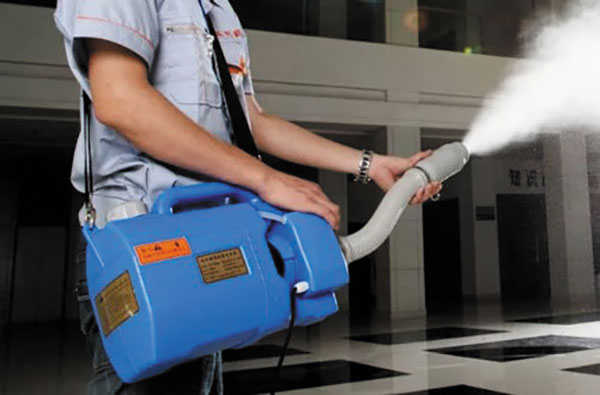 Surface disinfecting to reduce the presence of viral and bacterial contamination is a critical process to create safe workplaces, but as hospitals have consistently proved, when a broadcast aerosol method is used indoors, the risk of contamination vs. disinfecting becomes a long-term problem. Aerosolized applications cover a large area but contaminate racks, trays, bins, boxes and equipment used in and on production hardware. This method puts disinfectants in areas where few viruses or bacteria are present: shelf tops, boxes, pallets, inside electronic equipment and on production hardware.

HVAC systems also pull the disinfectants into the system, dispersing them back into the environment, impacting these areas, even when not directly sprayed. Manufacturing offices and common areas require good air purification to reduce microdroplet exhalation from coughing and sneezing using UVC and air-purification systems, along with face coverings that dramatically reduce these risks. Using approved sprays and wipes, such as hydrogen peroxide or alcohol-based materials, reduces the viral load and permits better ways to protect workers and electronic hardware.

Creating a safe workspace should include a clear plan for worker safety but not at the expense of the equipment, product or working systems. There are times and places for broadcast aerosol disinfecting, but with planning, organization and understanding the corrosive nature of many of the disinfectants, the workplace can be safe and fully functional without creating a corrosive air-quality environment.

These case studies show a direct correlation to the application of disinfectants in or around production hardware. We must understand and qualify the workplace environment during production and WIP for electronic hardware, equipment used in production and testing, and all surfaces with which hardware will come in contact. These performance issues are not related to the electronics assembly process but the exposure to corrosive contamination from the disinfecting environment.

Ed.: This article was first published at the SMTA Pan Pacific Microelectronics Symposium in January 2022 and is republished here with permission of the authors.

Terry Munson is president and founder of Foresite; terrym@foresiteinc.com, and Phil Isaacs is senior engineer at IBM; pisaacs@us.ibm.com.