A total of nine groups of PCB surface finish were evaluated for solder spread and voiding performance with assembled BGAs and QFNs.

Lead-free HASL is not readily available and consistent flatness is difficult. Electrolytic Ni/Au is expensive and, if too much gold is deposited on the pad, can lead to brittle solder joints. Immersion tin shows solderability degradation after exposure to multiple heat cycles, as in a top- and bottom-side PCBA reflow process.

Preconditioning on PCB. The PCB with various surface finishes were subject to various preconditioning, to study the effect of each preconditioning in regards to solder spread and voiding performance on BGA and QFN devices.

Preconditioning #2: PCB pre-baked in an oven with temperature of 105oC for eight hours.

Preconditioning #3: PCB pre-baked in an oven with temperature of 155oC for six hours. This is to simulate 1.5 yr. of shelf life.

Preconditioning #4: PCB pre-baked in an oven with temperature of 72oC and 85% RH for eight hours, followed with a bake at 105oC for one hour. This is to simulate more than six months’ shelf life.

Preconditioning #5: PCB goes through reflow oven one time, then assembled.

Preconditioning #9: Same as #8, except the PCB is hold for 48 hr. before being assembled.

Preconditioning #10: Same as #8, except the PCB is hold for 72 hr. before being assembled.

A total of nine different surface finishes were used. The first six consists of OSP, PF, ENIS, IAg, ENEPIG and Hi-P ENIG. Each surface finish has three samples per preconditioning, except ENIS, where only one sample was available for preconditioning #1 to #8. In addition to the first six, PF was added as a topcoat to IAg, ENEPIG and Hi-P ENIG to observe any difference in performance.

The test vehicle in use was the company Multifunction Test Vehicle (MFTV) (FIGURE 1). The solder paste used was no-clean lead-free Sn3Ag0.5Cu (SAC 305) and the board was reflowed in convection oven with air atmosphere using a typical lead-free reflow profile. 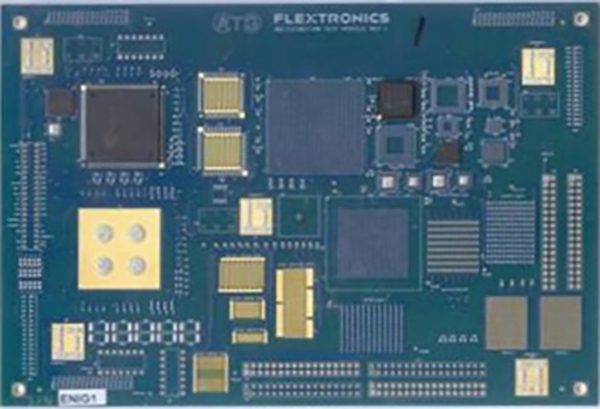 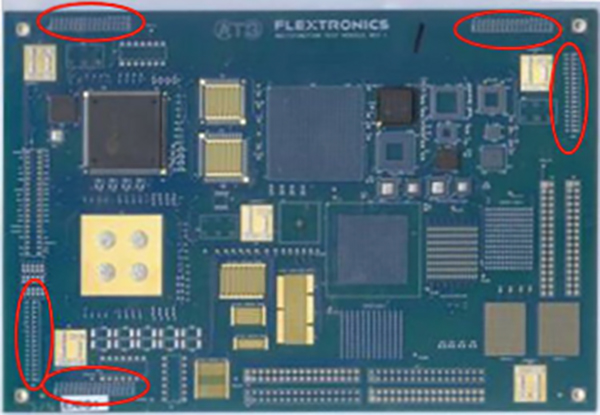 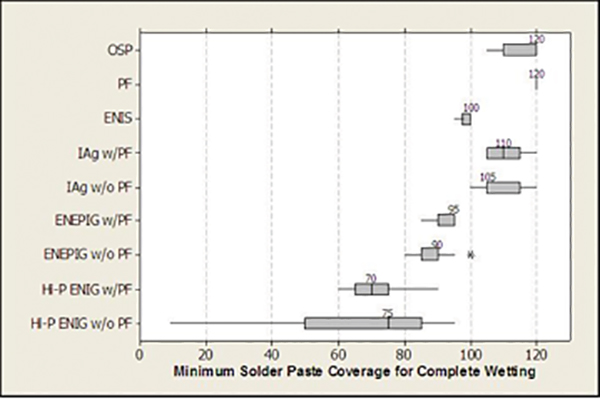 Based on the data, for reflow in air Hi-P ENIG has the best spread with 70 to 75% solder paste coverage providing 100% wetting. A summary of solder spread results is provided in TABLE 1.

The smaller the solder paste coverage required means better wetting performance. In general, Hi-P ENIG has the best wetting performance across all preconditioning scenarios. No significant difference was found between IAg, ENEPIG and Hi-P ENIG surface finish alone and treated with PF. Both OSP and PF surface finishes required over-print of solder paste to achieve 100% wetting on pad.

Voiding performance of BGA and QFN. The voiding percentage on BGA balls of a 196-pin I/O BGA (U1) and a 64 pins I/O BGA (U300) were measured using a laminography x-ray system. The locations of U1 and U300 are shown in FIGURE 6. 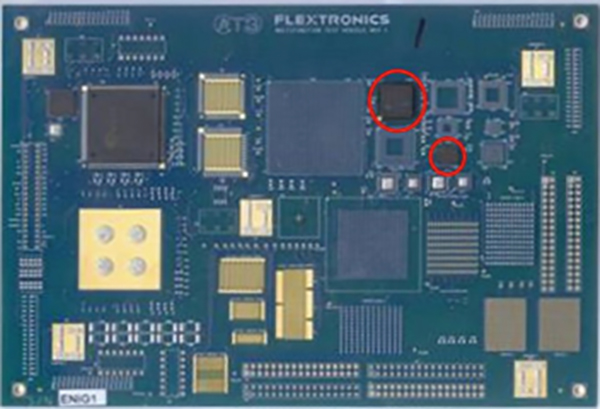 All voiding percentages were below the 25% allowable per IPC-A-610. Both ENEPIG and Hi-P ENIG had the least voiding, at below 4%. All other surface finishes had voiding less than 6%. A box plot of the voiding percentage is shown in FIGURE 7. 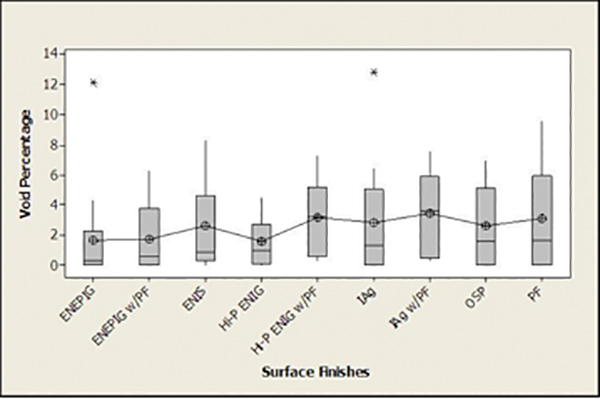 The voiding percentage on the ground pad of QFN/BTC component at U314 was measured using the laminography x-ray system, and the results shown as box plots in FIGURE 8. The QFN ground pad voiding percentage various from 35% to 50%. There was no particular surface finish with significantly less voiding. 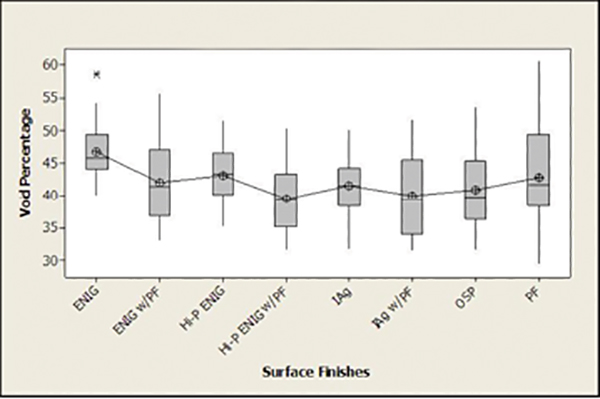 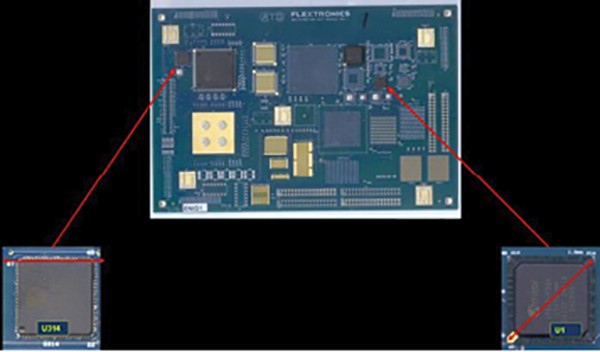 Figure 10. Picture of micro-voiding on PF vs. Hi-P ENIG and ENIS. 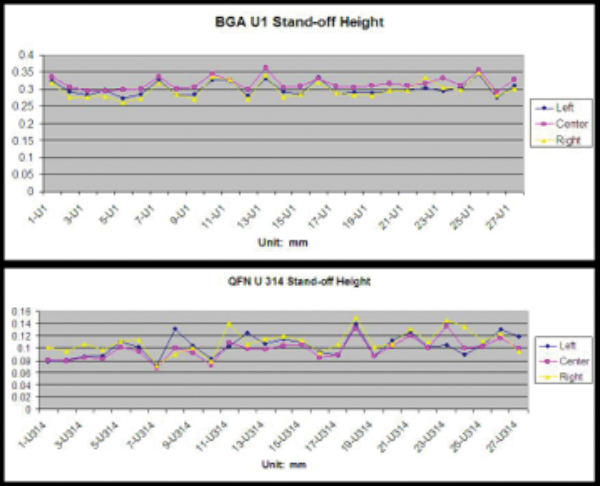 Figure 11. Graph of standoff height on BGA and QFN/BTC.

On surface finishes with PF, copper discoloration was observed visually and micro-voiding at the pad interface was found on cross-sectioning.

There are many other factors that affect the selection of surface finishes, such as cost, key pad contact, IMC strength for drop/shock/vibration, etc. The user should verify the product design requirement and select the proper surface finish for use.

Ed.: This paper was first published at IPC Apex Expo in March 2014 and is reprinted here with permission of the authors.